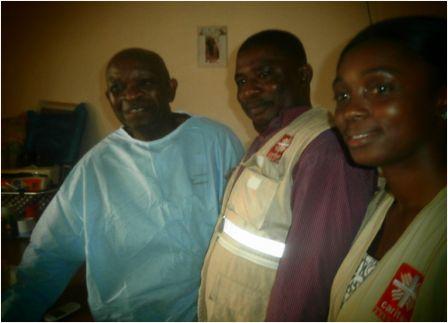 Caritas Sierra Leone on the 14th August 2017, donated food supplements including cartoons of biscuits and bundles of water worth millions of Leones to Connaught Hospital Mortuary volunteers for the National service they are rendering to fellow citizens who fall victim of the natural disaster.  (Photo: Left to right Consultant Government Pathologist, Dr.Owiss Kamara, Caritas Sierra Leone staff)

The sad story which occurred as a result of flooding and landslide did not only left over four hundred people dead but many are also conveyed to health centers by ambulances for medical attention while thousands left homeless.

Presenting the gift to the Government Consultant Pathologist on behalf of CARITAS, Project Manager, Caritas Sierra Leone, Idris Mansaray described the incident as pathetic moment for the country that needs immediate attention.

In that regard, Mansaray said they decided as a charitable institution to provide food support to mortuary volunteers who include Mortuary staff, Red cross response team, Sierra Leone Police, Metropolitan Officers and Soldiers that formed the security wing during the process of retrieving dead bodies with excavators at the ugly scenes and to control the large crowd of sympathizers around mortuary.

Mansaray expressed sympathy to all victims’ especially members of the bereaved families and encouraged other humanitarian organizations to do same so that they can help in their own little way.

He demonstrated thankfulness to all volunteers for their national sacrifices to serve humanity and emphasized on the manner the heavy down pour has destroyed lives and properties in various communities in the west part of Freetown including Regent, Mount Sugar Loaf, Mortormeh, Goderich, Lumley, Mountain Cut, Kroo Bay, Kaningo among others.

Receiving the donated food condiments on behalf of the Connaught Teaching Mortuary Complex, the Government Forensic Consultant Pathologist, Dr. Simeon Owiss Koroma commended Caritas for what he described as timely donation and he re-echoed that indeed the disaster has claimed many precious lives. He encouraged CARITAS team to wait until the total figure of Carcass in the Mortuary. The Pathologist explained that the bodies were going to be separated among men, women, the aged and children.

He extended appreciation for the donated items and mentioned that he is working with his team tirelessly to prepare files for those who may want to identify their loved ones. He deliberated on how the mortuary was overwhelmed with dead bodies from dawn till dusk.

Dr.Owiss Koroma concluded by registering profound condolence to all families and sympathizers that have missed their relatives due to the mudslide and flooding.