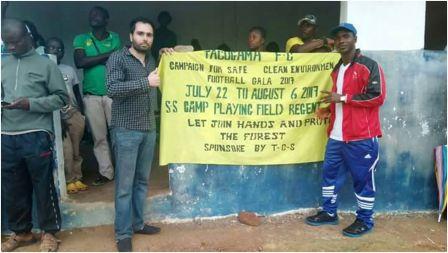 After the national anthem was played, the manager of the Tacugama Sanctuary, Mr. Aram Kazandjain, took the kickoff that saw both teams battling for supremacy by attempting to score goals through free kicks and corners.

The competition was to sensitize the public to keep their environment clean and safe as prior to the final, the Tacugama Sanctuary organized the cleaning of the Regent Village Cemetery.

Regent Progressive FC’s Joseph Kamara broke the deadlock in the 40th minute with his superb opening goal that saw supporters flooding the field in wild jubilation.

The game was competitive and violence-free with top players from the two sides, including Aga and Messi, entertaining spectators with their dribbling prowess, fantastic passes and kicks with several unsuccessful attempts to hit the back of the net.

After the opening goal, Hill City fought back relentlessly to level the score but the stout defense of Regent Progressive kept the aggressive attackers at bay.

Presentation of trophies by Mr. Aram Kazandjain with Le1 million to the champions and Le500, 000 to the runners up as well as certificates of appreciation to the best players climaxed the event.

As a motivation to spectators and the community, players of the two teams demonstrated their commitment to clean their environment by picking up garbage in the field.

A representative of the Sierra Leone Police Force admonished all to be law abiding and refrain from violence while the councilor for the area congratulated the winners and appealed to the runners up to improve on their performance next year affirming that there is no loser in the well-attended final.

The match was officiated by representatives of the Sierra Leone Referees Association who were acclaimed by spectators for their professionalism.

The Tacugama Chimpanzee Sanctuary on Friday 21st July 2017 donated 18 scholarships of Le200, 000 each totaling Le 3.6 million to deserving pupils of various primary schools in the Mountain Rural District of Freetown.