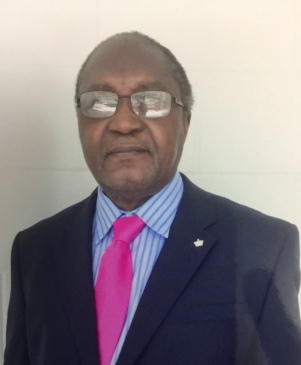 For the first time in Sierra Leone’s educational history, a new text book on Government for West African students at the Senior School Certicate and General Certificate Examinations at ‘Advanced’ Levels has been published in Winnipeg Canada.  The author, Anthony Karim Kamara’s decision to write and publish this text book came following three visits I made to Sierra Leone to launch and advertise my earlier publications on Fourah Bay College history ‘A Concise history of Fourah Bay College’ and ‘From Clinetown to Mount Aureol 1827 to Present’. I noticed  at the Sierra Leone Diocesan Bookshop, the oldest bookshop in Sierra Leone with origins going far back to colonial days that there was not a single textbook in any subject matter for secondary schools in the country.  (Photo: Anthony Kamara Sr., author)

During the course of my stay, I made visits to the surviving bookshops in the country, the EPP Bookshop on Mount Aureol, the Sierra Leone Diocesan Bookshop at Gloucester Street and the CLC Bookshop at Circular Road. To my amazement, I found no school text books in all these book shops. The CLC  bookshop sells mostly Christian Literature Books, the SLD Bookshop today has been reduced to selling stationery with not a single school text book for secondary school level either in the sciences, or the arts subjects. The former Provincial Enterprise at Garrison Street closed even before the Rebel invasion of Freetown in 1998.

In my discussion with the SLD bookshop Manager, I learnt that school text books had disappeared from Sierra Leone stores since 1995. For some twenty-two years to the day Sierra Leone secondary schools had gone with no standard text books in all subjects in the school system, with the notable exception of the Late Chief Education Officer Mr William Conton who wrote ‘West Africa in History Volumes 1 and 2’ which is no longer available, Professors Magbailey Fyle and Joe A D Alie, who have done a very commendable job on Sierra Leone history.

The reason or reasons for the dire scarcity of school material and text books is due unfortunately to the fact that our country  lacks the committed and dedicated educated compatriots with the passion  to write for school needs. A few do write but, not tailored to the needs of our schools.  Since the mid sixties, our country had been almost entirely dependent on books published by Nigerian and Ghanaian writers in almost all subject disciplines and those writers of yester years are no more and, our own academics do not seem to have a penchant for writing on anything that borders on the educational system.  It is painfully embarrassing and even saddening to us all for a country known internationally as the cradle of western education in sub saharan Africa at Fourah Bay College, The Athens of West Africa, to imagine that having been blessed with having the very first university institution in Africa South of the Sahara, trained West Africans who returned to their home countries  and made use of the education acquired from Freetown, and many of them went on to produce the much needed standard text books for the educational system for all West Africa.  Thanks to their efforts. What are Sierra Leonean educators and academics doing to arrest the continued downward dive of educational standards in our country which is no longer a secret to everyone? We all accept that educational standards are seriously in decline; but what have we done to reverse this trend?

We are all aware that the senseless civil war was the trigger for the collapse in standards; but that war ended nearly twenty years ago and the educational standards still continue in the downward dive. Everybody reins in criticisms of the decline in educational standards which every government functionary, every parent and every student in the country is well aware of; but what has anyone done or hope to do to arrest and reverse this downward slide? Today our Sierra Leone students all over the country have come to be totally dependent on pamphlets in all subjects which puts them at the mercy of school authorities and there is now a competition in the production of pamphlets in every school. Why must Sierra Leone become a nation of pamphlets in our educational system?

Nothing is easier than finding faults with the system, but what  have the critics done  to salvage this decadent state of education in our schools?  It is never wrong to criticise and point out pitfalls but those who criticise must be able to offer solutions to the sick system  geared towards arresting the decline and restore confidence in the broken system. The system is broken, no doubt; but there must be  determined efforts by all to restore confidence in it. Unless our educators and academics offer a lending hand by doing something in the form of writing standard textbooks for our educational system,  the system is doomed. Are we sacrificing the descendants of the sons and daughters of “the Athens of West Africa”  to  education by pamphlets,  which leaves them at the mercy of local schools? My brothers and sisters, something has to be done to change the status quo in schools. Our bookshops today sell only stationery material. Where have all the school textbooks gone? where are the new writers for schools? Our children are undoubtedly thirsty for learning, hungry for education, but our educated compatriots seem to have failed them which is worrisome not only to students, but to parents as well. The new ‘Fundamentals of West African Government’ covers in the fullest details of both the WASSCE and ‘A’ Level Examinations. Parents no longer have an excuse for lack of a text book on a popular subject like ‘Government’ for arts students in West Africa. This new text is comprehensive and covers in the fullest details of the West African Examinations Council syllabus at the two levels for the students. Education by pamphlets should henceforth be a thing of the past and parents too must feel a sense of relief for this new publication.

The book will soon be available at the SLD Bookshop at 3 Gloucester street in Freetown hopefully by mid August 2017. Rush to secure your child’s copy before it is late.

The 167 page textbook may be purchased via Paypal for just US$35.00 + $20.00 for S+H in North America and Europe or by Money Transfer through MoneyGram, and communicate details of transfer to