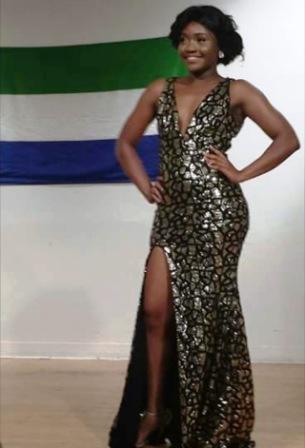 After a five year hiatus due in part to an interruption by the Ebola epidemic, the 3rd Annual  Sierra Leone New York pageant returned to the Bronx Museum Sunday as a big hit.

For most of the 200 participants who patronized and celebrated the event, the celebration was more so for the revival of a platform that showcases Sierra Leone culture and history than the pageant itself.

Spearheaded by the Union of Sierra Leonean Organizations in New York, the pageant brought together participants from Delaware, New Jersey, New York and Pennsylvania as well as different Sierra Leonean professional organizations and social clubs to what organizers say is to reconnect them to their roots

Tiah Knox, the founder of Sierra Leone Fashion & Art Council also Sierra fashion week, UN youth ambassador, community advocate and one of four pageant judges says the pageant itself was a “restoration event”  ensuring that the pageant was restored again post Ebola, giving the  young contestants an opportunity to represent their Country in the Diaspora.

“As part of the judging panel, our deliberation was based on variety of categories to ensure the right girl earns her win.  Fenella Kargbo, (Winner) was very unique in all her appearances, from ‘Flag parade’ to ‘Africana Interview’ to ‘swimwear’ to the ‘evening gown’ and consistently wow us the judges,” Ms Knox said.

According to Zainabou Sesay-Harrell, the event’s originator to be eligible to contest in the pageant you must be a woman between the ages of 18 – 26 years old, must be single with no children, law abiding, speak English, currently enrolled in a two or four year college or university, residing in the USA either in the State of New York, New Jersey, Connecticut, Delaware, Massachusetts or Pennsylvania.  And most of all, contestants must be a descendant of a Sierra Leonean mother, father, grandparents or born in Sierra Leone