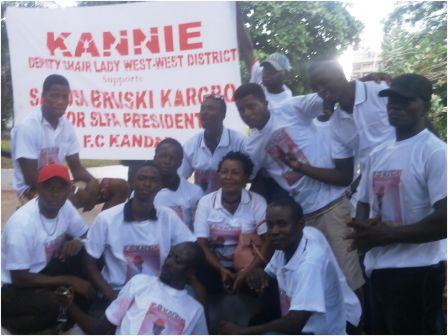 Kanie Sesay said the country’s Football would have developed if Sanusi should have been the President throughout the wasted years in Aisha Johansson led executive adding that she came to know about Bruski declaration ceremony two days to the event but she went extra mile to print T-Shirts, banner and all other necessary arrangements.

She described the occasion as a moment of joy because she said, Bruski has done and will continue doing great things to elevate Football nationwide adding that the President in waiting has poured his national resources for the improvement of the game.

“I love Bruski because he encouraged every idea towards the improvement of the game devoid of sectionalism” she said and called on Government through the Ministry of Sports and Football stakeholders for Bruski to clinch the SLFA Presidency so that he will do more than what he has done.

Kannie expressed believe that Bruski will defeat the incumbent President, Madam Aisha Johansson whom she accused of doing nothing throughout the wasted four years to unite stakeholders not to talk about encouraging players. She expressed disappointment that, as a Chairlady of Mighty Blackpool, her colleague woman (Johansson) never invited her to any engagement throughout her tenure in office.

According to Kannie Sesay who is commonly called ‘Mammy Queen,’ her father was a die-hard supporter of Blackpool till his death, adding that she joined Blackpool since the age of fifteen till date.