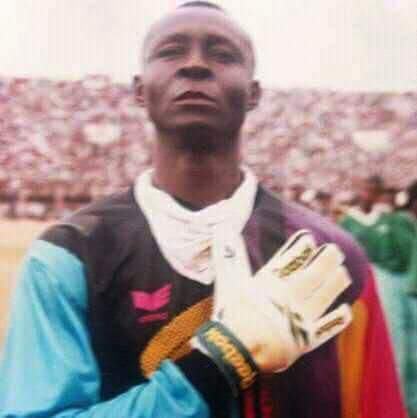 He was known in Liberia as the ‘Monkey’ for his good goal keeping abilities and acrobatic styles.

Atouga made his international debut for Leone Stars during the 1984 Amilcal Cabral Zone II football tournament held in Freetown for the first time. His last game was against Morocco in Freetown in 1997 in a 1998 World Cup qualifying match which they lost 1-0. He was re-carded in the second half after Leone Stars had exhausted all their three substitutions thus forcing defender Kemokai Kallon to transform himself from an in- field player to a goal keeper.

‘The Guy’ as he was fondly called was a member of the Leone Stars team that represented Sierra Leone at both the 1994 and 1996 Africa Cup of National finals in Tunisia and South Africa respectively. He was on the bench in the Tunisia but played of three Leone Stars’ matches in South Africa against Burkina Faso, Algeria and Zambia respectively.

Atouga who was also nicknamed ‘Banana chop’ played for Al Mansoura in Egypt where he died on 7th July 1999. He was buried at the Kingtom cemetary in Freetown few weeks later.

In my opinion, his best match in Leone Stars jersey at home was against Cameroon’s Indomitable Lions in a 1992 Nations Cup qualifier in Freetown which ended 1-1 with the late Brima George scoring a header for Sierra Leone. Atouga denied the Cameroonians fresh from the 1990 World Cup in Italy several scoring changes including three face-to-face saves in the first half.

He was in 1988 rated among the best goalkeepers in Africa.

I regard him as the best goal keeper Sierra Leone have ever produced. Do you agree with me?

Atouga, The Guy, Banana Chop continue to rest in peace! You always have a place in Sierra Leone football history books!