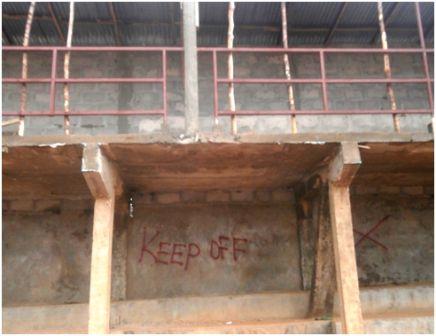 It has come to the notice of Sierra Express Media that the collapsed substandard Aberdeen Mini Stadium constructed by the APC Member of Parliament for Constituency 111, Hon. David Johnson remains closed.

It could be recalled that the said substandard mini stadium collapsed recently killing a holiday maker who came from Bo after taking the WASSCE exercise and severely injured about eleven people including spectators and others who were waiting for the rain to seize.

The MP expressed sympathy to the dead and all victims of the ugly incident because according to him, it is not his wish but it’s the will of God. He disputed the fact that the DJ booth collapsed because it carried more than five people for which the department was constructed for.

But community members who called for the demolition of all the Pavilions to prevent unnecessary death in the future expressed dismay over the poor construction of the stadium.

They alleged that the legislator used the substandard stadium which has left mix feelings among inhabitants of Aberdeen to campaign his subjects to vote for him in the last Parliamentary election.