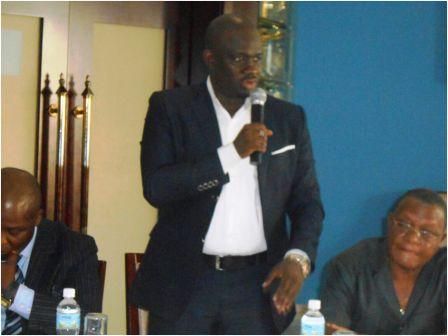 Since its establishment, the Smallholder Commercialization and Agribusiness Development Project (SCADeP) has been steadily moving forward and creating impact under the leadership of Sulaiman S. Sesay with the solid support of its Grant Manager, Alimamy Kargbo.  (Photo: SCADeP Project Coordinator, Sulaiman S. Sesay)

On Thursday 16th March 2017, the Sierra Leone Agribusiness Development Fund (SLADF) was officially launched at the Bintumani Hotel, Aberdeen in Freetown in collaboration with the Fund Manager, KPMG which was based on the first call for concept notes for funding under the SLADF.

It was disclosed at the ceremony that the whole idea about the fund is an invitation of the government with support from the World Bank aimed at providing competitive productive finance to agribusinesses and their out-growers with the ultimate goal of improving productivity and fostering market linkages to benefit smallholder farmers.

SCADeP Project Coordinator, Sulaiman S. Sesay enlightened that SLADF is a component of the SCADeP and was transformed to provide funding to private for profit registered agribusiness and off taker companies in Sierra Leone and called on stakeholders to work together to advance SCADeP for the development of the country.

Ministry of Agriculture, Forestry and Food Security Director General, Francis Sankoh, who chaired the ceremony, highlighted the aims of the new project among them to strengthen the agricultural growth in the country; strengthen the private sector engaged in agriculture; for farmers to have access to finances and help service providers to play a major role in moving agricultural activities forward.

Francis Sankoh also assured that the agricultural sector is not alone with the people in agricultural activities and called on the poultry farmers to get ready to help out-growers.

KPMG Managing Partner, Vidal Decker, said that the fund is a catalyst to support the agricultural sector investment in the country as it is the first call of what is expected to benefit up to 50,000 smallholder farmers in the country intimating, “KPMG is calling for quality concept notes with innovative ideas to boost agricultural production in Sierra Leone.”

Finance Minister, Momodu Lamin Kargbo, stated that the launching of the fund is a key milestone in the implementation of government’s renewed commitment in restructuring and transforming the economy of Sierra Leone articulating, “we have renewed our commitment in this direction in light of hard lessons learnt from the recent twin crises of the Ebola outbreak and the simultaneous crash in the price of iron ore in the international market.”

Momodu Lamin Kargbo further stated that with determined and sustained focus in promoting agricultural development it would certainly be able to reverse the current rising trend of prices of basic needs resulting from excessive dependency on import for domestic consumption underlining, “it is disturbing to note that food imports account for about 25% of our total imports and average around US$ 350 million annually for the past five years while we could massively produce this domestically with agricultural transformation, coupled with other sectoral developments.”

World Bank Country Representative, Parminda Brar was delighted and hoped that the project would benefit the people recalling that several projects have been initiated in Sierra Leone by independent firms to enhance the growth of the agricultural sector.

Imperative to Get Rid of Sunday Tr...