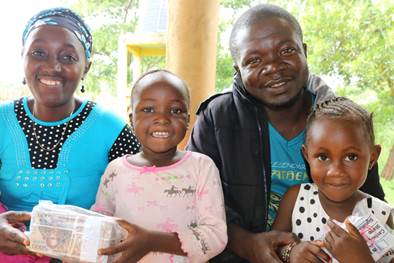 The Kallons are a brave family. They were all infected by the Ebola virus at the peak of the outbreak in Daru town, 36 miles from Kailahun, the eastern-most district of Sierra Leone. They fought courageously and emerged victorious against the disease. However, they encountered fresh battles from community members; they were stigmatized and rejected by people they thought would rejoice in their recovery from the deadly disease. They were excluded from community activities and branded as the survivors.

The family’s nightmare began in August 2014 when the mother, Jattu Kallon, took part in the burial ceremony of her father, who succumbed to the virus in Malema a village adjacent to Daru town. A day after her return, she too began manifesting the symptoms of Ebola. Within three days the disease had spread to every member of the family.

Ebola is known to be a very traumatic illness both in terms of symptom severity and mortality rate. What many do not know is the shame, guilt and perhaps the indelible stain survivors often have to endure, over and above severe economic hardships as they step out of the treatment centre.

“When the ambulance came for us that day we had to hide in the ceiling for fear that if they take us to the hospital we would never come back alive,” Mr. Kallon said as he gently cuddled his one-year old son whom he nicknamed “after Ebola”.

Battling Ebola was horrific but more terrifying was the economic hardship after having lost everything.  The Kallon family are one of many beneficiaries of a United Nations Development Programme (UNDP) initiative that seeks to sustainably restore livelihoods of the Ebola survivors in Kailahun, Kenema, Moyamba, Port Loko, Bomballili, Tonkolili, and Bo districts.

The project aims to restore and improve the livelihoods of Lahai and 2,500 other Ebola survivors from their normal activities through the provision of cash transfer, skills training in micro-entrepreneurship, farming, livestock and technical skills such carpentry, tailoring, etc as well as a  start-up grant upon completion of their preferred courses.

The Kallon’s story is unique. It is one of the very few instances in which the disease infected an entire family and all of them survived. The family plans to use the cash to meet school expenses for the girls and to support Mrs. Kallon to start a small business.

UNDP is building on its experience of digital financial service inclusion with innovate mobile money payment for Ebola response workers project in Sierra Leone. Financial inclusion of the unbanked and rural communities is an important factor that can contribute to sustainable development.