Protesters had placards with the statement “We want our own staff.” Senior chiefs, ordinary indigenes, women and youths were all present at the local hall in the chiefdom headquarters, Corobola town, on that Monday morning at about 10:00 or thereabout.

In an interview with some of the protesters, they alleged that PC Fasalie Marah III, who is an ex-serviceman, is an autocratic ruler.

According to them, their Paramount Chief has been in the chronic habit of fining defaulters exorbitantly.

According to Teacher Marah, a former Treasury Clerk, the state law stipulates that no local court should impose more than Le50, 000.00 (Fifty thousand Leones) as fine, but said the local court in Corobola town under the mandate of the Paramount Chief has been imposing exorbitant fines on defaulters.

He also alleged that when the Member of Parliament for Constituency 045 Hon. Marah sent some quantity of cement for the erection of a local town hall, PC Fasalie Marah III converted it to his personal use and Fakiri Mansaray, who was the caretaker of the cement in question, was incarcerated for three days when he questioned the Paramount Chief.

The officer-in-charge of Mongo Police Station, Insp   ector Samura, confirmed that Fariki Mansaray was detained on the orders of the Paramount Chief without interrogation.

Fariki Mansaray claimed that he was deprived of food when he was behind bars for the three days.

When contacted to react to the allegations leveled against him, Paramount Chief Fasalie Marah III refused to comment on them, but said the only thing he would comment on is development in his chiefdom.

The chief also defiantly said he is above the law in that part of the country under his command.

It could be recalled that Neya is an amalgamated chiefdom and the section where the Paramount Chief hails from comprised twenty-four villages while the other section has seventy-six villages. The subjects of the latter section who believe the Paramount Chief is ruling them with high handedness want the chiefdom to be de-amalgamated hence their protest call for: “We want our own staff.” 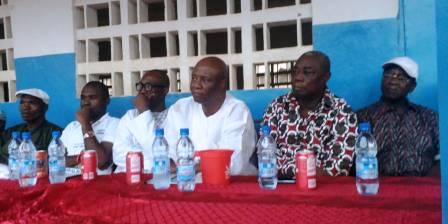