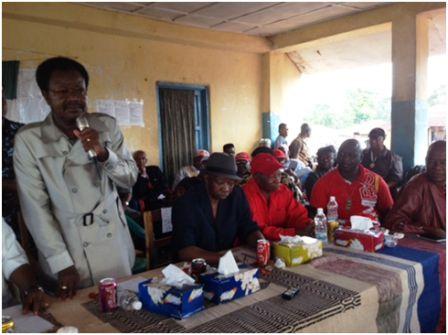 The Ruling All People’s Congress (APC) has awarded their symbol to Tom Tucker for the forth coming Parliamentary bye-election in Constituency 025, Kono district following the death of the former MP, late Hon Torto. (Photo: Vice president Victor Bockarie Foh in Kono to award APC symbol.)

Speaking at a mammoth gathering at the Community Centre in JiaimaSewafeh, Nimiyama Chiefdom, in Kono district, Vice President, Dr. Victor Foh expressed felicitations and thanks on behalf of his boss, His Excellency, Dr. Ernest Bai Koroma to the people of Kono for their patient and in the fight to end the deadly Ebola virus not only in Kono district but the nation as a whole.

He went on to state some of the development plans the Leader and President of the country, Dr. Ernest Bai Koroma has put in place for the district, adding that President Koroma was pleased with the people of Kono for their patience in terms development of the district.

Vice President Foh said he was very happy to be in Kono, expressing his satisfaction over the unity among the various Paramount Chiefs in the district.

He called on the people of Kono to work with the President and his government in order to achieve the goals of the Agenda for Prosperity and improve not only the district but work towards the unity of the country.

Admonishing the aspirant, Tom Tucker, the Hon. Vice President told him that receiving the party symbol was not the end neither the final decision, but needs to work with the people in the dispensation of his duties.

He warned that let no one thinks he is bigger than the other as in politics, everyone is entitled to a vote and that those votes became crowd; the crowd, he maintained, is matter.

He encouraged the other contestants who did not get the APC symbol not to relent but work with the party and their fellow contestant to retain the seat in Constituency 025, adding that they will surely be rewarded for their relentless efforts.

The Hon. Vice President called on all APC politicians to be humble to the people they are serving and the party, adding that supremacy comes from God.

Among the VP’s delegation was Minister of Transport and Aviation, Leonard Logus Koroma who earlier introduced VP Foh to the people of Nimiyama Chiefdom, Kono District. He saidVice President Fohwent through rocky hills for the party and that as a Southerner he had never deflected to any other political party irrespective of the humiliation he had gone through.

Minister of Local Government, Madam Diana Konomani, in her statement earlier, said the visit of the Hon. Vice President was an indication to the Kono people that VP Foh was part of them and that he has great love for them.

Giving the purpose of the gathering, Minister Konomani said the Hon. Vice President was in the district representing His Excellency, Dr. E. B. Koroma to award symbol and present the candidate to the people of Constituency 025 for the forthcoming Bye-election in that constituency.

Statements were made by various APC party stalwarts in the district including the APC District Chairman, Gbondo Penny Panny, who described Constituency 025 as very vital to the people of Konoas it is only a government in power that is capable of developing their district, giving them good roads, electricity, water, amongst others.

In his acceptance speech, candidate Tom Tuckerdedicated the symbol to his fellow contestants and called on all to join and work with him to deliver the seat. He committed himself to the party and the people of Kono that he will surely deliver the seat and that upon assuming the power the party and his people will be his priorities.