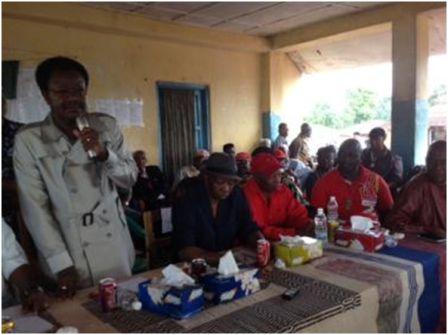 Presenting Mr. Mohamed Allie Bah to the people of Malema chiefdom at a well-attended meeting at the Jojoima Court Barray, Vice President Foh encouraged the people to be cautious and abide by the Health Emergency regulations as the Ebola epidemic is coming to an end. He recalled the deadly devastation the virus has caused to the country, stating that thousands of lives have been swept away by the deadly disease thereby putting behind major socio-economic activities of the citizenry.

The Hon. Vice President called on the chiefs, traditional and religious leaders, youths and every citizen not to be complacent in the fight to end the virus.

Addressing the Minister of State, Mohamed Alie Bah, VP Foh admonished minister to be humbled, show love, respect and caring for his people in Malema Chiefdom and the country at large. He said the minister was not a boss but a servant for the people of this nation and that for him to serve his people best, they (people) should in turn give him the support he needed to accomplish his goals.

He maintained that His Excellency, Dr. Ernest Bai Koroma who was in India to attend a state function on behalf of his people, is a fair President that always loved and cared for his people; “he despised hate and disrespect for people in the lower class,” he said, adding that every Sierra Leonean should emulate such an attribute in order to move the country to a higher height in the development strata.

The National Secretary General of the All People’s Party, Ambassador Usman Yansaneh, in his address, reaffirmed the love that the His Excellency has for his people, adding that he demonstrated that in the appointment of his Principal Assistant, Ambassador Dr. Foh and Cabinet Ministers, irrespective of ethnic boundary and religion.

Ambassador Yansaneh said even though the Leader and President, His Excellency, Dr. E. B. Koroma is a Northerner, he is confident to give power to the people of the South-East. He assured the people of Malema Chiefdom that the APC party is a party that cares and responsible for the people of this country and that this was demonstrated in the love and care they are showing to the country’s one time youngest Head of State, Captain Valentine Strasser and others.

Paramount Chief Ngevao, in his welcome address earlier, said that the presentation ceremony of the Minister of State in the Office of the Vice President was a landmark history in his chiefdom. He said the APC party is a good party and that it has done a great achievement for his chiefdom by appointing their son, brother and father to such a position in the political arena.

P.C Ngevao assured the All People’s Congress party of a reward, come 2018. He went on to assure the party that the people of Malema Chiefdom will pledge their support to the party as a sign of appreciation for recognizing their son and daughter in the government.

“We will give the party another Member of Parliament in 2018,” he reiterated.

Earlier, in his opening remarks as chairman of the occasion, the Minister of State, East, Maya Kaikai said the APC party is a grateful party and a grassroot party that has no barrier in terms of ethnicity, region, religion, race or colour.

He encouraged the people of Malema Chiefdom to work with their MP and minister and pray for God’s directions in executing their state functions.

Former head of State, Captain Strasser and Sam Hinga Norman 11 in their speech, respectively, congratulated the Minister of State in the Office of the Vice President and called on him to work in the interest of the people of this nation and to work with His Excellency, Dr. Ernest Bai Koroma in taking the Agenda For Prosperity to a success.

Hon. Regina Songu of Constituency 005 and the Minister of State in the Office of the Vice President thanked His Excellency, Dr. E. B. Koroma, his able Vice, government officials for giving such recognition to their chiefdom and pledged their unwavering loyalty to the party and the people of this country. 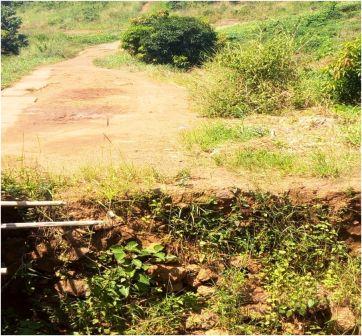