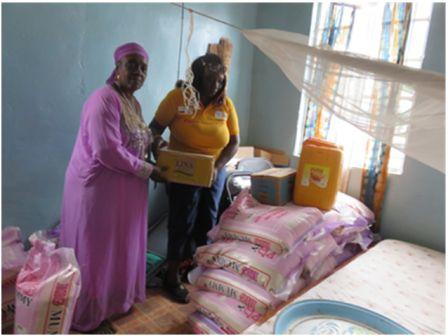 Bombali, August 26 (SLENA) – The Maternal and Reproductive Health of Adolescent Girls were taken care of by the Women’s Forum during the Ebola crisis as over three hundred girls in the Tonkolili and Bombali Districts were kept gainfully occupied for three months during the crisis period.  (Photo: Distribution of the items)

Eight Safe Spaces were established in the Tonkolili and Bombali Districts through the project titled ‘Adolescents Maternal and Reproductive Health’ in the wake of the Ebola outbreak through the financial support of UN Women and UNFPA.

Even with the re-opening of schools, the adolescent girls are still making valuable use of the spaces where they still benefit from psychosocial counseling.

Among them are orphans and survivors that the Forum successfully advocated for their support.

Fifty survivors, among them ten orphans, were provided with supplies from BRAC and psychosocial counseling last week.

The supplies consisted of bags of rice, packets of soap, litres of cooking oil and variety of clothing etc.

Among the orphans were twins, Fatmata Koroma and Isata Koroma, aged 15. They are from Pate Banner Marak, Bombali District. The youngest survivor is three year-old Isata Koroma, staying back of Voyager Hotel in Tonkolili who is being taken care of by her father, having lost her mother, grandmother and two other siblings.

Psychosocial Counseling was rendered to the survivors, who appeared to be very much in need of this psychological support.  Some of the survivors need medical attention as they complained of bodily aches and pains. They are having medical attention from the district hospitals having been referred there by the Ministry of Social Welfare, Gender and Children’s Affairs.

Ms. Fatu Conteh from Madam Rati Safe Space, who gave the vote of thanks on behalf of the girls from Bombali, acclaimed the Women’s Forum for spending their time and energy “walking the walk” with them, blessed BRAC for the supplies and appealed desperately that they are in dire need of support, stressing that for them, Government cannot do everything.

On her part, Mrs. Gladys Hastings-Spaine, General Secretary of the Women’s Forum, pleaded passionately for the establishment of “Safe Spaces” for adolescent girls all over Sierra Leone, “considering the impact of these Safe Spaces in the lives of adolescent girls”.

The vote of thanks was rendered by Mariatu Conteh from Madam Fatou Kargbo Safe Space who revealed that the girls from Philip Safe Space in Bumbuna performed very well at the last BECE and applauded the Forum for the guidance and prayed that God richly bless the donors.