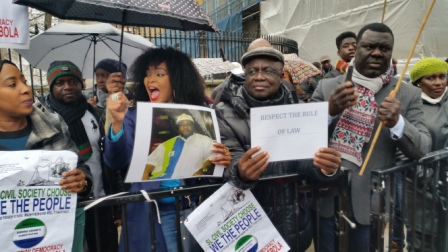 Many concerned Sierra Leoneans on Sunday, 28th March, 2015 braved the weather in London to demonstrate against the unconstitutional actions of President Koroma following the removal of Vice President Sam Sumana and the appointment of Ambassador Victor Foh as new “vice president”.

The demonstration which attracted women, men and young people across political parties and from different walks of life took place opposite the office of the British Prime Minister David Cameron, at No. 10 Downing Street.

Speaker after speaker, including women and young people, expressed what they refer to as a “betrayal” by the President to breach a constitution which he swore to protect.  Many of the speakers called on Sierra Leoneans back home to defend the constitution and express themselves by engaging in peaceful demonstrations across the country and civil disobedience to save the democratic values which have been eroded under President Koroma.

Demonstrators were also very keen to express their views.  One Fatmata Conteh said “President Koroma must be impeached.  He has acted against the spirit and the letter of the constitution.  Therefore, he must be removed from office because he is not fit to govern if he cannot uphold the constitution”.  Another demonstrator, Tamba Gborie said that the actions of the president are clearly unconstitutional and if there was going to be any compromise to the constitutional crisis the President must resign from office.  Tamba Gborie also said that Vice President Sam Sumana has been treated unconstitutionally and he must be reinstated as the Vice President.  A female demonstrator, Annie Kabbah, said that at this time people should not be afraid to express themselves because they live in a democracy.  For Modupeh Johnson, she said that the President  should have concentrated  on the providing the basic amenities  for  Sierra Leoneans  including  electricity, pipe borne water, reducing the price of food  commodities  and eradicating Ebola rather  than  destroying  the country’s democracy.

During the demonstration the crowd chanted many slogans such as “Bring back Sam Sumana”, “Victor Foh Must Go” and “Respect our Constitution”.  The Demonstrators also held various placards some of which read “Mr. President Respect the Rule of Law”; “Respect the Rule of Law”; “The Judges must give us justice, President Koroma respect our constitution”; “Sierra Leone Civil Society Choose we the people. Don’t Destroy Democracy Under the Cover of Ebola”; “We don’t want another South Sudan in Sierra Leone”. As the rain poured demonstrators were determined for their voices to be heard and the British passers-by and tourists took pictures of the demonstrators whilst many demonstrators also held pictures of Vice President Sam Sumana.

This demonstration is the first of series  of actions that will be taken place in the UK as the next demonstrations are scheduled for Thursday 9th April 2015 which will target the Embassy of the Sierra Leone High Commission and on the 27th April 2015 to commemorate independence there will be a massive demonstration wherein  a position statement is expected to be read out opposite the office of the British Prime Minister cataloguing the many undemocratic, illegal and unconstitutional actions taken by President Koroma since he came to office.

Also as part of the on-going political engagements many Sierra Leoneans who were present at the demonstration vowed to write letters to their various British Members of Parliament, Government Ministers and the Leader of the opposition for urgent action by the British Government.

The demonstration ended by the singing of the national anthem to show the love and commitment the demonstrators have for Sierra Leone.