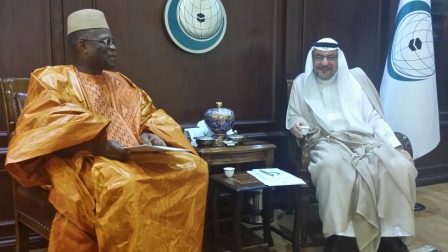 The Secretary General of the Organization of Islamic Cooperation (OIC), Dr. Iyad Ameen Madani, on Thursday, 12th March, 2015 received at the OIC headquarters in Jeddah, H.E. Alhaji Mohamed Sillah Kargbo, Ambassador of the Republic of Sierra Leone to the Kingdom of Saudi Arabia.

The Sierra Leone envoy was there to present his Letters of Credence as Sierra Leone’s Permanent Representative to the OIC. It could be recalled that Ambassador Kargbo assumed duty as Ambassador in April, 2014 and presented his Original Letters of Credence to the former Saudi Monarch, King Abdullah bin Abdul Aziz Al Saud in August of the same year. The envoy is also accredited to the Gulf States of Qatar, Bahrain, Arab Republic of Egypt and the Syrian Arab Republic.

During the presentation, the Ambassador conveyed fraternal greetings and felicitations from His Excellency President Dr. Ernest Bai Koroma to the Secretary General.

About his appointment by H.E. President Koroma as Ambassador Extraordinary and Plenipotentiary to the Kingdom of Saudi Arabia and Permanent Representative to the Saudi based organization, Ambassador Kargbo said that it is a demonstration of the importance Sierra Leone attaches to the already existing cordial ties between the two countries and the 57 member States organization.

Ambassador Kargbo promised to work towards strengthening the relationship between Sierra Leone and the OIC.  He also used the occasion on behalf of President Koroma to thank Dr. Madani, his predecessors and the entire membership of the OIC for their support to Sierra Leone over the years; especially in the areas of  Health, Education, Agriculture, to name but a few.

About the Ebola virus currently challenging Sierra Leone and the West African Sub-Region, the Ambassador also on behalf of the President, Government and people of Sierra Leone thanked the OIC Scribe for the joint resource mobilization conference for Sierra Leone and other Ebola affected countries organized by the Organization of Islamic Cooperation (OIC) and the Islamic Development Bank (IDB) in November 2014, at the OIC Headquarters.

The envoy gave an update of the disease and its debilitating effect on Sierra Leoneans and the country’s economy. He highlighted the efforts being made by President Koroma, the Government of Sierra Leone, its International Partners, NGO’s, Civil Society and the people of Sierra Leone in the fight against the Ebola Virus Disease and appealed to the OIC to continue its support and solidarity in the fight against the deadly scourge, in order to eradicate it once and for all.

In conclusion, the Ambassador conveyed the appreciation and satisfaction of his country with the leadership of the Secretary General and assured him of their continuing support.

On his part, Dr. Madani whilst welcoming the envoy; congratulated him for his appointment as Ambassador Extraordinary and Plenipotentiary to the Kingdom and Permanent Representative to the OIC. He also wished him success in the discharge of his assignment.

The OIC, which was established in 1969, is the second-largest inter-governmental organization after the United Nations and has 57 member states spread over four continents. The organization is the collective voice of the Muslim world and it safeguards and protects the interests of the Islamic world in the spirit of promoting international peace and harmony among various people of the world. Sierra Leone became a member of the OIC in 1972 under the Presidency of Dr. Siaka P. Stevens.