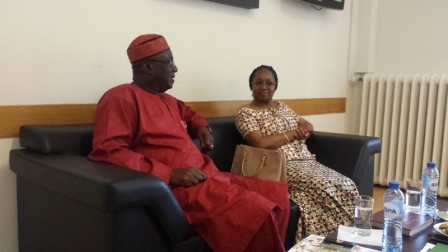 Sierra Leone’s Ambassador to the Federal Republic of Germany, Ambassador Jongopie S. Stevens has told the new Guinea Ambassador to Germany, Mrs. Fatmata Baldi Toure that they should work as sister countries to tap the exiting investment potentials available in Germany.

Mrs. Toure paid a courtesy call to Ambassador Stevens at his Chancery building last week.  Issues relating to strengthening the bilateral relationship between the Mano River Union countries and the Federal Republic of Germany, including efforts aimed at achieving a resilient recovery of Ebola in the three most hit countries were discussed.

Welcoming his colleague, Ambassador Stevens said Sierra Leone, Liberia and Guinea are facing serious setbacks as a result of the deadly outbreak, stressing further that countries affected should now focus on a strategic plan aimed at responding to the many ways the disease had devastated the three nations. He assured Ambassador Toure of a strong partnership in promoting the interest of their respective countries.

Responding, Ambassador Toure thanked her colleague for the warm reception accorded to her noting that Sierra Leone and Guinea share common values. She stressed the importance of working together in an effort to achieve common goals.

A Secret Letter to The President:...