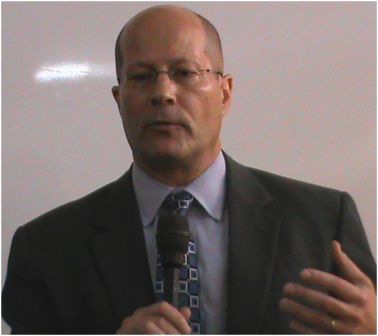 Addressing the Sierra Leone Ebola Prevention Vaccine Press Briefing in Freetown on Tuesday February 17, 2o15,  Ambassador Hoover reiterated the long standing relationship between the United States and Sierra Leone, describing the event as an historic moment for the partnership.

Cross section of the press

He noted the participation of the various groups and individuals working together with the Ministry of Health and Sanitation, the University of Sierra Leone and lauded them for their efforts.

Making the briefing, Acting Provost, College of Medicines and Allied Health Sciences (COMAHS), University of Sierra Leone and Principal investigator, Dr. Mohamed Samai told his audience that the vaccine is important because it might help protect people from getting Ebola during this outbreak and future ones in helping to save lives.

The goal of the study in Sierra Leone, Dr. Samai said, aims at evaluating how well an Ebola prevention vaccine helps protect people from getting Ebola, and to expand the safety profile of the vaccine from previous smaller studies. This and other Ebola prevention vaccines he said, are being studied in other African countries, the USA, Canada and Europe.

Commenting on the time line, Dr. Samai said it is expected that the study will begin early March 2015 after obtaining the necessary approvals that ensures national and international safety and ethical standards, adding that the study has already been approval by the Sierra Leone Ethics and Scientific Review Committee, Ministry of Health and Sanitation. “Approvals are also pending from the Pharmacy Board of Sierra Leone, the US Food and Drug Administration (FDA), and the CDC Institutional Review Board”.

“These approvals, including using the rvsv-ZEBOV Vaccine, are expected in the next few weeks”, affirmed Dr. Samai.

The study districts are Western Area, and chiefdoms in the Bomali, Port Loko, Tonkolili because these are the severely affected Ebola districts in the past few months.

Participants that are eligible to the vaccine are health care workers noting that their jobs put them at higher risk of getting Ebola.

“Until the study begins, study leaders would continue to engage leadership at the national, district, and community level. These engagements include Paramount Chiefs, tribal heads, religious leaders, ward councilors, and elders in the study areas. The press has been targeted for sensitization, education and awareness raising.