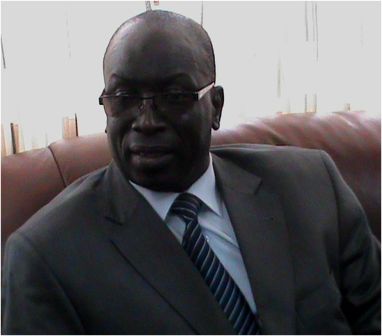 Speaking during a courtesy call on the Minister of Health and Sanitation, Dr. Abu Bakarr Fofanah at his Youyi Building office in Freetown, General Ndiaye reiterated his government’s moral support and best wishes to end the Ebola in Sierra Leone, and conveyed messages of goodwill from their President to demonstrate the solidarity of being one family in the same region.

He said Senegal opened a humanitarian corridor to assist affected sister countries in the present crisis: Sierra Leone, Guinea and Liberia, and re- affirmed their continued solidarity towards the end of the epidemic.

Responding, Health and Sanitation Minister, Dr. Abu Bakarr Fofanah expressed gratitude and appreciation over the visit, describing the solidarity of their government and leadership as laudable in the fight to contain the Ebola virus disease in Sierra Leone.

The visit, he said is historic, and the brotherhood in the fight to end the Ebola in Sierra Leone, an invaluable support, especially at the wake of the Ebola when Senegal provided air space for the lifting of logistics and personnel, when others closed their borders.

Giving an overview of the outbreak, Dr. Fofanah dilated on the cross border movement, trade fairs and trade promotion, and the Mano River Union (MRU)/ECOWAS partnership and solidarity in the fight against Ebola.

He said the outbreak in Guinea and Liberia was a concern for Sierra Leone noting  the geographical link and brotherhood solidarity.

The outbreak in Guinea in March sets the stage for emergency preparedness and response though with a weak health system, Dr. Fofanah told his audience.

He opined that border control was mounted to track cases though borders were not closed for obvious reasons, adding that the Ministry, the government and partners are now scaling up to put the Ebola war to an end.

The team, as part of their mission are to visit Port Loko, Bombali and Liberia before their departure.