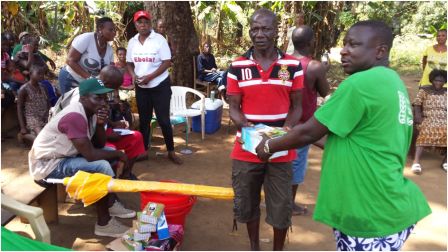 Banana Island one of the most isolated fishing communities within the Western Area peninsular has been empowered to resist against the Ebola Virus with supported provided by the National Ebola Response Center (NERC) and a German NGO -Welt Hunger Hilfe (WHH).  (Photo: RECTOUR Chairman Francis Kappia (right) handing over the Ebola logistics)

The support is aimed at empowering the fishing community to resist Ebola by any form they have been provided with veronica buckets, sanitizers and soaps to promote hand washing, beach umbrellas for check points and thermometers for temperature checks, they were also provided with touch lights and batteries.

The Chairman of RECTOUR Francis KAPPIA one of the local partners working in the peninsular area said Banana Island is one of the communities where people are likely to escape from Aberdeen which has recorded spike in Ebola cases.

He called on the Ebola task force to report any suspected case of Ebola in the area.

He called on the community to make good use of the donated items for its intended purpose so as to defeat Ebola and also encouraged the volunteers to effectively carry out their duties.

She urged the Banana Island community to embrace the prevention and control measures of Ebola.

The fishing community has less than 500 people and can only be reached by boat or helicopter they have also not recorded any case of Ebola since its outbreak.

The Banana Island community headman Alison Wray said the area has not recorded any Ebola case due to the frantic measures they have been put in place in the Island.

He said the fishing community is also a tourist destination for her rich history and heritage and the majority of the people rely on fishing as the major source of their livelihood.

He said most of the people are frightened about visiting other parts of the country due to fear of contracting the disease and taking it to their community.

Inhabitants of Banana Island say Ebola has seriously affected their daily livelihood and they have also agreed not to welcome any visitor to the Island from anywhere, because they lack the necessary logistics to tackle any unforeseen outbreak.

The Banana Island headman expressed profound thanks and appreciation to WHH and NERC for their timely intervention.