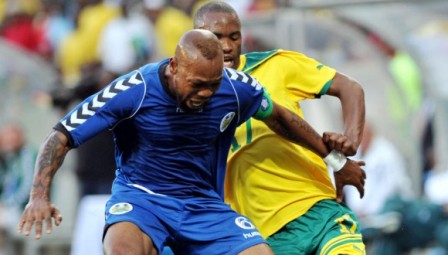 World football’s governing body FIFA has of now said that there is still insufficient evidence of match-fixing to explain the suspension of Ibrahim ‘Obreh’ Kargbo in photo by the Sierra Leone Football Association (SLFA) and will not enforce a global ban.

Ibrahim Kargbo was suspended along 14 others in Sierra Leone on allegations on match fixing the outcome of 2008 African Nations Cup qualifier against South Africa which ended in a goalless draw.

Football authorities in Sierra Leone said in a statement it had received “credible and tangible information” on the alleged involvement of the group in match-fixing. However, since the alleged accusation investigations are pending.

Last week a FIFA spokesperson, while answering to questions from Dutch medium said Kargbo, is not in any FIFA blacklist of players relating to match-fixing as alleged in some of the international media.

“The existence of such a list is not known to us. The recent accusation reported in the Dutch media first must be examined by the Dutch football authorities.” Dutch media, Brabants Dagblad reported

It was reported in De Volkskrant that Kargbo is one of the players who are on the blacklist to FIFA suspected cheaters.

The Dutch Football Federation (KNVB) on Saturday opened a match-fixing inquiry after claims on the former Sierra Leone skipper on allegation of match-fixing “Willem II had rigged the results of two matches, including one against giants Ajax.”

Kargbo 32 denied the accusation, telling the paper: “I’ve never received money, from anyone.”

Responding to the allegation – Willem II has said they were “shocked and surprised” at the allegations. “We will naturally assist as much as possible with any eventual investigation in order to unearth the truth”,” a club statement announced.

Kargbo was not part of the Atlético Club de Portugal last weekend league victory against Olhanense after Dutch media De Volkskrant reported that he (Kargbo) was the main suspect in match manipulation in two of Williem II Eredivisie clash against Ajax and Feyenoord during the 2009/10 league season.