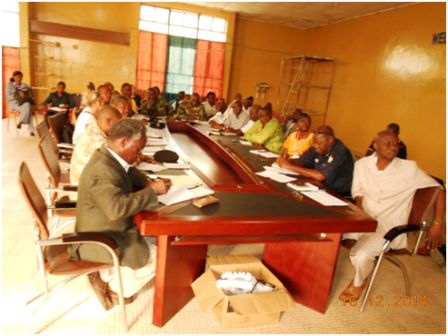 The Executive Director of the Attitudinal and Behavioral Change (ABC) Secretariat has urged the Bo District Ebola Response Centre (DERC), during the Secretariat’s Countrywide Ebola Education and Sensitization Enforcement Campaign and Monitoring of Ebola Operations to scale up their efforts in containing the spread of the Ebola Virus Disease in the district and its various chiefdoms.  (Photo:  Members of the Bo DERC at a meeting with ABC Secretariat.)

Dr. Ivan Ajibola Thomas expressed his dissatisfaction over the increase number of Ebola cases in the district and the poor coordination among the members to take decision on the quarantined of Kakwa and Bumpeh Chiefdoms which are the main hot spots in the district.

Dr. Thomas urged members of the Bo DERC to device robust strategies and take firm decisions in the fight against Ebola; he encouraged them to emulate the best practices of the authorities in Kambia and Pujehun districts in their firm decisions and implementation of the bye laws, hence making progress in containing the disease.

The Bo District Ebola Coordinator, Mr. Sahr K. Foyoh promised to exhibit strong leadership and gather the needed support from the different stakeholders towards the fight against Ebola in the district. He accused the nurses and doctors of being passive in the fight against Ebola in the hospital, ”If they did not desist from their lackadaisical nature I will make a formal report to the Ministry of Health and Sanitation” he warned.

The DERC Coordinator noted that doctors and nurses often go on strike when their incentives are not paid, but most of them are not ready to take the necessary sacrifice. He called on the nurses and doctors to work even during the holiday periods so as to contain the spread of the virus, noting that the war on Ebola has no holiday.

The District Medical Health Officer for Bo District, Doctor Alhaji S. Turay revealed that the work load is very much and pressure is on the medical team for them and that the district is under staffed as some of the doctors have been transferred to other medical units. He however promised to engage his staff on some of the concerns raised at the DERC meeting.

The Chairman of Bo Inter-Religious Council, Reverend Emmanuel Farma said the Council is working on a communiqué on the prevention of Ebola that will be presented to the District Ebola Response Centre for implementation.

The ABC’s Regional Coordinator, South, Mrs. Alice Hawa Fatorma said the Secretariat appreciates the role of the Bo Inter-Religious Council in the fight against Ebola in the district and expressed hope that their proposed communiqué will include robust actions to contain the spread of Ebola.

She pleaded with them to intensify their role in the containment of the Ebola Scourge in the district, noting that if they are able to convince their congregations to accept the preventive measures proposed by the health experts to break the chain of Ebola transmission as the religious leaders are highly respectable authorities among their membership.

In another engagement the ABC Secretariat visited the Treatment and Holding Centres in Bo. The treatment centre is managed by Medicines San Frontiers (MSF) with four hundred and eighty staff including

International medics and majority of local health workers and has a capacity of a hundred and four beds. The Holding Centre is managed by International Rescue Committee (IRC) and the Government of Sierra Leone with a capacity of twenty seven beds.

The Project Coordinator, Medicines San Frontier Michael Trainitys said the number of reported cases in the Bo treatment centre is increasing but has however registered over two hundred and twenty survivors.