Homepages
Your trusted place for Sierra Leone and global news
Trending News
HomeFeaturedEbola: The horrors, the challenges and the triumphs

Ebola: The horrors, the challenges and the triumphs 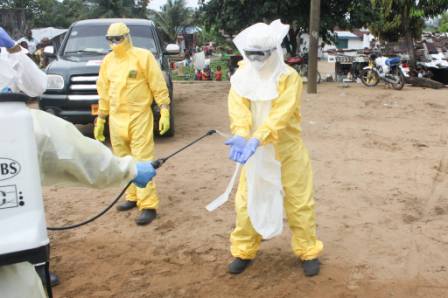 Ebola: The horrors, the challenges and the triumphs

Twelve year old Adama (not her real name) could not hold back her tears as she recounts her traumatic ordeal. “I lost my father, my mother, my sisters, brothers and several other close family”!

The primary school going-girl is one of two lucky members of her family who survived this merciless virus.  A total of 9 (nine) of her immediate relations had succumbed.

The young girl, from a place called Portee, in the East end of Freetown, explained that their problems started from a visit by a friend of their mother. The visitor had come from one of the affected communities in the provinces. Just a few days into her stay with them, the visitor started showing signs of ill- health. But all appeals to their mother to dismiss her sick friend or to take her to a health facility proved futile until several days later when the visitor’s condition had worsened. The visitor eventually travelled back but news came few days later that she had died of Ebola. Then one by one, the young Adama’s family started falling sick and, eventually, 9 of them were taken down by Ebola.

On 10th January, 2015, the innocent Adama was discharged certified Ebola free. But she is going home with a broken heart…  “my father, my mother, my elder brothers, my elder sisters, my cousins are all dead”, she wept. “I don’t know what to do, how do I survive, how do I go back to school, the 12 year old lamented in despair.

Like Adama, several other survivors I spoke to told similar stories of how they were exposed and the calamity that followed.

A young man and a 51 year old man who  described themselves as  Christian “prayer warriors” were requested to pray for the sick. The young man told me he had laid his hands on a patient they were praying for. After several hours of prayer, he had to called on their leader, a sight impaired 51 year old man to join in the “spiritual battle” Unfortunately, it was this young man who had to bring the blind leader to the sick person by holding his hand. The patient turned out to be Ebola positive and died. Few days later, the young man fell ill and then his leader, but they reported early and they both survived. “I must have infected my leader because he didn’t actually touch the patient”.

Bintu, 21, another young lady I spoke to recounted a very incredible story. She became infected by trying to confirm that her aunt had indeed died. Bintu told me she tried to listen to her dead aunt’s heartbeat. Swap result later confirmed her aunt had died of Ebola!

The horrors of the epidemic have been excersabated by the challenges in breaking the chain of transmission. The public education on the implications of touching, keeping the sick at home, not seeking medical help, has still not been fully accepted  by some people.

However, the gallant health workers remain focused on their noble mission of saving their Sierra Leonean compatriots. On 10 January 2015, a total of 30 survivors were discharged at the highly acclaimed Hastings Treatment Center. This brings the number to almost half a million survivors to have walked out of the gates of that facility which is exclusively manned by Sierra Leoneans.

Dr. Santigie Sesay, the Coordinator of the Center said, “we have admitted a total of 751 since September 20, 2014 and 499 have survived. This shows a survival rate far more than what is stated by the World Health Organization”. Dr Sesay went on to state that “we have the technical capacity to do the job, all we need is the necessary support to facilitate our work”.

Meanwhile, several well meaning organizations have been trouping in at Hastings to support the survivors with start up kits. These comprised toiletories, canned food, vegetable oil, bags of rice, household utensils. These items are in addition to the Ministry of Social Welfare’s discharge package of matresses and Le,250,000 to each survivor.

The “Young Professionals” (YP), a group of Sierra Leoneans from all walks-of life, continues to be among these groups. Today, the YP, who were the first to make such donations at Hastings, again provided assorted food and none-food items to every single survivor. Ms Mimi Bangali, a representaive of the YP said, “this is a small token just to assure you that all is not lost. Lots of organizations including ours have keen interest in your welfare and we will continue to engage”.

While all these efforts stand out as successes in the fight against this outbreak, analysts say, there is still need for sustained public eduaction and the enforcement of the bye-laws in every community. But I strongly believe that to overcome the horrors of the Ebola virus, individuals must also take some responsibility and stop playing God or Doctors!