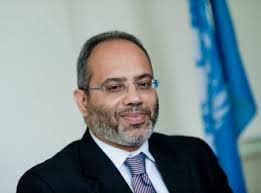 Addis Ababa 15 December, 2015 – The Executive Secretary of the Economic Commission for Africa, Mr. Carlos Lopes has called on the international community to consider debt cancellation for Ebola-affected countries as this would create the right conditions for recovery in their post-crisis phase.

Speaking at the launch of the new ECA Report on the Socio-Economic Impacts of the Ebola Virus Disease on Africa, Mr. Lopes said, “We have life with Ebola; and in the aftermath of these countries in crisis, debt cancellation would allow the countries to start from a clean slate from a macroeconomic dimension. This, he said, would be essential, given all they are going through right now in relation to all the deviations of public expenditure that were provoked by the response needs.

The report raises the alarm on the risk of a rise in mortality of diseases not related to Ebola, as well as the wider impacts of the virus on the livelihoods of those affected. Educational systems, rising social stigma, unemployment, and decreased food security are some of the big issues that Ebola-affected countries must deal with, according to the report.

Mr. Lopes also contends that the size of the 3 economies is so small, “the impact would be reduced to 0.05% percent in terms of overall GDP on the Continent.”

Yet, cautions Lopes, “the impact on perception can be much higher than the real GDP as it affects a number of decisions related to investment, tourism and travel,”

The report explores the impact of the 13, 241 cases identified and 4 950 deaths reported in the region since the outbreak earlier this year. Mr. Lopes has called for a careful and cautious approach to the response and notes that while the social and economic situation in the three most affected countries is dramatic, the Continent will have to deal with the impact on perceptions.

“The study is based on ground research by ECA staff and relies on consultation with the national authorities who have had the opportunity to tell their own story,” he informed the meeting.