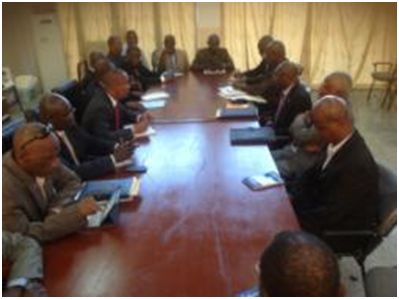 Freetown, Dec. 15 (SLENA) –The Minister of Mines and Mineral Resources, Alhaji Mr. Minkailu Mansaray last week briefed members of the Parliamentary Oversight Committee on Mines and Mineral Resources on the general status and the operations of the mining sector in the country especially that of the African Minerals Limited and the London Mining Company.  (Photo: Mines officials and MPs charting the way forward)

Speaking to the committee at the new administrative building in parliament, the minister informed the committee that before the outbreak of the Ebola epidemic, the mining sector was at its peak and most of the companies constructed schools, bridges, offered scholarships to children in the community as part of their corporate social responsibility.

He lamented that the outbreak caused series of challenges and setbacks in the mining sector, hitting hard the economy, resulting in the transfer of ownership of assets and sale of shares.

The minister said there had been concerns raised by members of the public of late with regards the operations of the mining companies, but could not respond to the allegations without first informing parliament and seek their backing.

He said the change of ownership of London Mining and African Minerals Limited was due to the scale down in the prices of iron ore in the world market which he said badly affected the operations of both AML and LMC.

The minister disclosed that presently these two companies have laid-off about 7,000 workers which, according to him, mighty caused social unrest.

On the issue of London Mining, the mines minister said the company owed Standard Chartered Bank about US $260 million and was unable to pay despite series of requests from their bank in London.  Therefore LMC had no option but to transfer the company’s ownership to the Timis Mining Corporation, he said.

He said government has however put mechanism in place to keep the operations of the two companies running so that they will continue to boost the country’s economy.

The Chairman of the oversight committee, Hon. Amadu Kanu thanked the minster and team for the briefing, noting that people have been asking questions about the status of these two companies and as representatives of the people they needed answers to those questions in order to properly inform their constituents about current situation in the two companies.

While the Deputy Speaker of Parliament, Hon. Chernor Bah urged the minister to continue to engage parliament regularly on the activities of his ministry, Hon. Sidi Mohamed Tunis, the minority whip also urged government to do all in its power to keep afloat the operations of AML and London Mining.