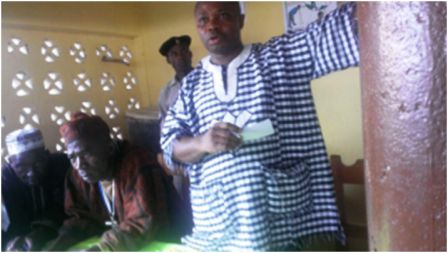 Koinadugu, Dec. 15 (SLENA) – Over the weekend, Member of Parliament representing constituency 044 in the Koinadugu District, Hon. Alusine Marrah together with stakeholders in the constituency engaged constituents living along the villages bordering the Guinea/Sierra Leone border on the challenges in the fight against the Ebola virus.  (Photo: Hon Marrah addressing constituents on the Ebola viral disease)

Speaking to constituents at Mansadu, Mongo Chiefdom, the Member of Parliament advised that border crossing be tightened between the two countries while mounting checkpoints at strategic crossing points.

He presented various items such as thermometers, hand sanitizers, rice and cash to members of the community.

The Paramount Chief of Mongo chiefdom, PC  Sheku Finah Kallie Marrah V thanked the MP for his visit which he described as timely, stressing that chiefdom bye-law established in the wake of the outbreak would be fully implemented. He urged the youths to step up efforts to educate the subjects on the Ebola virus.

Also speaking at the ceremony was Hon. PC Alie  Balasama Marrah of Sengbe Chiefdom who lauded the MP for taking up the Ebola education in towns and villages along the Guinea border.

Donations of similar Ebola materials were also made at Sengbe chiefdom.