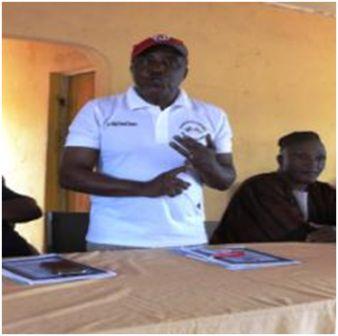 The medical and traditional authorities of Koinadugu District have registered their strongest determination to eradicate the Ebola Virus Disease from their district within forty-five days. This commitment was made during a four day Ebola Education and Sensitization Enforcement Campaign organised by the ABC Secretariat which targets all the twelve provincial districts in the country. The aim of the ABC campaign is to persuade and convince people to adhere to the preventive measures as prescribed by professionals to break the chain of transmission of the dreadful disease.  (Photo: Dr. Fasineh Samura Speaking)

The Coordinator for the Koinadugu District Ebola Response Center, Dr. Fasineh Samura noted that Ebola will only exist where the people are not ready and willing to comply with the medical advice and bye laws instituted by various local communities for the eradication of the Ebola virus in Sierra Leone.

”We have given ourselves a month and half to finally eradicate Ebola out of Koinadugu” he disclosed; he further said that they have been able to contain the spread of the virus in fourteen villages and are now battling with three.

Explaining how they were able to overcome the virus, Dr. Samura said they surveillance and registered all the inhabitants of  Neine Chiefdom where the disease broke out, and check every household  on daily basis for sick people and strangers, stressing that it is the movement of infected persons that is the root cause of the spread of the disease in the district.

He examined that national and international stakeholders of the district are helping them greatly in trying to contain the spread of the virus. Dr. Samura commended the traditional authorities for giving them the required support and for fully implementing the bye laws.

The Paramount Chief (P.C.) of Dembelia Sinkunia Chiefdom, P.C. Alimamy Lahai Mansaray V informed the ABC Secretariat that he is working very hard to ensure that his chiefdom is free from Ebola. He vehemently told his Section Chiefs to ensure that no Ebola case is reported from their sections; ”if any Ebola case is reported from any section in this chiefdom I will relieved from his responsibilities the chief in that particular section” he warned.

P.C. Alimamy Lahai Mansaray strongly counselled his people not to host any stranger in his chiefdom even if the person is a family member, and that they should avoid cross border activities with Guinea. He expressed confidence in his people that they will not disappoint him but that they will adhere to his advised and comply with the bye laws. He told the people of his chiefdom that the ABC Secretariat is the institution charged with the responsibility to influence positive attitude and behaviour in the country, and that their Ebola education and campaign is to persuade the people to be very positive by avoiding touching the sick and corpses of Ebola victim.

The P.C. appealed to them to stay away from certain cultural and traditional practices such as the rite of passage necessary to the burial of the dead, and other traditional rites that will encourage the spread of the virus.

Mr. Momoh Konteh whose philanthropic activities has made him a household name in the fight against Ebola in the district, authoritatively informed his people that he would not hesitate to take strong actions to ensure that the chain of the Ebola transmission is broken in the district. ”I want to make it known that if we have an Ebola case in any village in Dembelia Sinkunia  Chiefdom we will burn that house,” he stressed. He furthered that they have done it in Neine Chiefdom and they got good result and that they will replicate the same in any chiefdom.

The philanthropist donated a motorbike to the taskforce in the chiefdom to facilitate movement. He also gave the sum of one million Leones (Le 1,000,000), eight temperature thermometer and malaria drugs to the people of the chiefdom.

Mr. Konteh encouraged the government to put the ABC Secretariat at the helm of the fight against Ebola in the country because the whole fight hinges on the attitude and behaviour of the people; ”T      he ABC Secretariat should have been empowered to champion the course to discourage the negative and behaviour of the people that is encouraging the spread of the disease,” he said.

The Director of the ABC Secretariat Dr. Ivan Ajibola Thomas pleaded with the people to suspend their customs and traditions such as burial rites, initiation into secret societies, clandestine burials or the exhumation of corpses that have speedily spread the disease in some parts of the country.

Dr. Ajibola Thomas implored the Chiefs and other authorities to make a pledge that if anyone dies they will report the case and if it is Ebola related death they would allow the burial team to do the burial. He also allay their fears on the manner of the burial and informed that it is government’s position that all burials should be respectful and dignified..

The National Coordinator and Second-in-Command of the ABC Secretariat, Madam Nanette Thomas informed the authorities that the Secretariat is on an Ebola education and sensitization campaign to ensure that the people of the district get the required Ebola messages to enable them to change their attitude and behaviour towards the epidemic.

Madam Thomas disclosed that the Secretariat took the venture after it became clear that the success to the fight against Ebola is tied down to positive attitude and behaviour, and as the institution charged with the responsibility to influence positive attitude and behaviour in the country, the Secretariat had taken the onus to meet Sierra Leoneans at their door steps to persuade them to be very positive in the Ebola war.

She also told them that the Secretariat had conducted the same in the Western Area as well as monitoring the food distribution to quarantine homes, adding that at the end of the nationwide tour, the Secretariat will make a national report to stakeholders in the fight against the disease.

The Commanding Officer for the Koinadugu District Ebola Command Centre, Colonel Idriss S. Kamara expressed his determination in ensuring that the centre is run accordingly, and recognised the efforts of those that have been working assiduously in making certain that the disease is contained in the district.

The Secretariat also visited the Kumala Community Health Care Centre that also serves as an Ebola holding centre for Neine Chiefdom, where the outbreak has been contained.

Paramount Chief (P.C.)  Foday Alimamy Umaru Jalloh III of Neine Chiefdom, thanked the Secretariat for taking the venture to visit his chiefdom. He disclosed that the outbreak started in his chiefdom in September, at Fankoya when an indigene of the village travelled from Kono and later became ill, and infected a lot of other people.

P.C Umaru Jalloh alerted medical and other authorities of the district about the case and they acted promptly by putting in a robust system with effective surveillance and contact tracing of all the Ebola cases in the chiefdom, and after a robust social mobilisation exercise executed, over 100 people voluntarily reported themselves for Ebola test.

He praised the workers at the centre for their professionalism. ”Since the creation of the holding center, we have got about 30 survivors that have passed through the centre before they were sent for treatment to other parts of the country.”

The P.C. of Neine Chiefdom Left with Workers at the Holding Center at Kumala and ABC Executives

P.C. Umaru Jalloh said because of that success story people are now reporting whatever illness they have to the health authorities. He furthered that his chiefdom is one of the largest in the country with over one hundred and forty (140) towns and villages. He however stated that poor road network is a major challenge in his chiefdom in the fight against Ebola.

An Infection Prevention Control (IPC) expert at the center,  Sarah Darma, explained that they were having eight suspected cases, but the results from Freetown showed that only two were positive and they were flown to Bo for further treatment, whilst treatment is being administered to the remaining six. She explained that the biggest challenges is the unavailability of a laboratory lab to do tests, stressing that it is a community care center but  they are currently using it as a centre to care for suspected patients.

An epidemiologist from the World Health Organisation (WHO) at the center Mayuko Saito said the social mobilization team is working very hard and that sensitization messages are being translated into local languages for better understanding. She explained that they usually take bio data of every suspect and do contact tracing by going to households everyday to monitor their health conditions, ”last weekend we visited seven villages and we checked every household for sick persons,” she said.