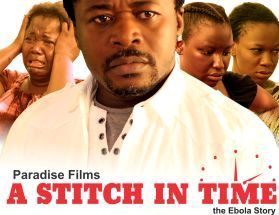 A Stitch in Time, the latest Sierra Leonean Ebola sensitization movie, will be premiered on the Sierra Leone Broadcasting Corporation Television (SLBC TV) this Saturday, December 13th  and Sunday December 14th at 8 pm each night.

The film, which was shot during the Ebola crisis, tells the story of six young Sierra Leoneans confronting the deadly Ebola disease.  Three of the friends do not believe Ebola is real.  The other three do, but are confused by misinformation, peer pressure, and cultural practices.  Interwoven is the story of a doctor who has treated the young daughter of a friend exposed to Ebola.  See which of these people defeated Ebola and who succumbed.  Learn what actions the survivors took to defeat Ebola.

Speaking to this reporter, actor and producer Jimmy B said: “This is part of effort to stop the spread of the Ebola virus.”  He said he hopes the film will be a powerful tool to sensitize especially young people about the Ebola disease and further change their attitude for the better.

Jimmy B said movies are a very important platform which appeals to young people, “ This is a very good medium to get the message across,” he said whilst adding; “ They can be entertained as well as educated through films.”

Jimmy B also said: “It is important for us to get this right and get rid of this disease. So we decided to come together to stop the spread of this disease through the arts which most young people can relate to.”

Jimmy B said, the film has some element of comedy, musical but the key message is about sensitizing people about Ebola and behavioral change.

He has supported efforts during Sierra Leone civil war to bring peace through many performances across Sierra Leone.  He also did a movie ‘Live and Let Live’ to raise awareness on HIV/AIDS.

The ‘Jika Jika’ star recently released a music video ‘Ebola-Must Go’ which features Wahid and C-Jay also as part of effort to raise awareness on the disease. He also produced an Ebola sensitization song with veteran Sierra Leonean musician, Steady Bongo and Mackie.

A movie critic told this press that he is not surprised that Jimmy B is releasing another film during this crisis period, “He is very consistent and always tries to support efforts of national interest.