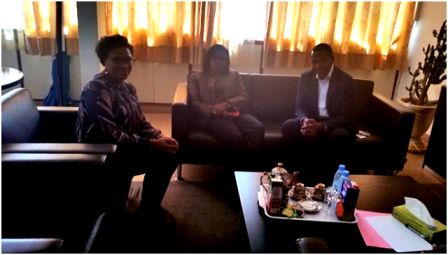 The Director of Cooperate Affairs Philip Morris West Africa, Mr. Harouna LY has disclosed that his Company has approved the sum of US$ 1OO,000.00 (one hundred thousand US dollars) for the purchased of an Ambulance and a Pick Up truck  to help in the serious fight against the EBOLA virus in Sierra Leone.  (Photo: Ambassador  Bassir and Mr. LY sitting together. )

According to the Cooperate Affairs Director, the amount is a symbol of his Company’s concern for the innocent and suffering people of Sierra Leone. He informed that the ambulance will be bought in Germany while the Pick Up will be shipped directly to Freetown from Dakar. The contract he said will be implemented by CARITAS.

Philip Morris’s contribution was as a result of an approach made by Sierra Leone’s Ambassador to Senegal Her Excellency Khadijatu Bassir to the company to seek assistance in helping the government in the fight against the Ebola Virus.

Ambassador Bassir expressed thanks and appreciation on behalf of the government of Sierra Leone. She referred to the gesture as a genuine show of concern, informing Mr. Harouna LY that the nation of Sierra Leone solidly stands behind President Ernest Bai Koroma as he leads the fight against the Ebola Virus.

“Despite the presence of the virus my country is still business friendly. I therefore call on all multinational and credible Companies such as Philip Morris to take full advantage of the numerous opportunities on the basis of win win” says Ambassador Bassir.

According to Ambassador Bassir, the government of Israel has earlier promised assistance in the form of medicines and equipments, whiles the government of Thailand is channeling their aid through the UN Agencies in Freetown.