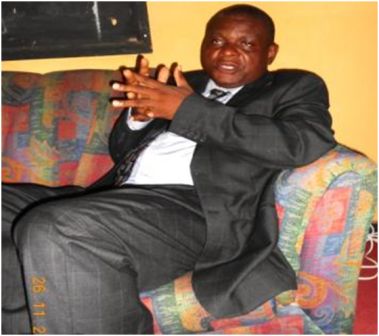 The Attitudinal and Behavioural Change (ABC) Secretariat during its four day countrywide visit to Bombali district which started from Monday, 24th November, 2014 has urged the People of Bombali to be very positive in the fight against the dreadful Ebola virus that is ravaging the country’s population and hampering development.  (Photo: Dr. Ivan Thomas Speaking to Stakeholders)

He cited that the virus started in Guinea and then to Liberia before it came to Sierra Leone but all the other two countries are almost containing the disease but Sierra Leone is still finding it very difficult to control it disease because of the negative attitude and behaviour of people by not accepting the precautionary measures.

The Executive Director urged the people of the district to comply to the Emergency Regulation and all the byelaws for the containment of the disease, and noted that since the Secretariat did not have the power to enforce laws, it is therefore advocating for strict compliance of the laws.

The National Coordinator and Second-in-Command of the ABC Secretariat, Madam Nanette Thomas expressed to the Paramount Chief of Bombali Sebora Chiefdom, P.C. Bai Sebora Kasangna II that the Secretariat is very concern with the rising number of Ebola cases in the district, and that the Secretariat is very pleased with the robust strategy of the authorities of Kambia. ”I hope that the chiefs and the people of Bombali will emulate the people of Kambia.”

The Paramount Chief for Bombali Sebora, P.C. Bai Kasangna II disclosed that authorities of the district are disappointed at the increasing number of Ebola infected cases in the district, and noting that they are finding it very difficult to contain the disease in the district because of the geographical location and size of the district.

P.C. Bai Kasangna II revealed that the disease spread in the district very fast when a nurse at one of the village health centers called Pate Bana Marank contacted the virus and because people were denying the disease about one hundred people at the village later became infected and died after the nurse died, and that made his chiefdom to be quarantined.

The Paramount Chief informed the ABC Secretariat that his Chiefdom has seven administrative wards, and that he has asked all his Sections Chiefs to heighten their efforts in the fight against the dangerous scourge as it is their traditional responsibility to ensure that they maintain a healthy environment for their subjects by containing the disease quickly.

The P.C. registered his commitment to ensure that all the by-laws relating to controlling the spread of the epidemic are fully implemented, ”the magistrate has fined over twelve people for breaking the by-laws and some have even lost their jobs due to that.”

He disclosed that secret burials are still taking place in some parts of the district, citing that, recently at a village called Rothemneh some people buried a corpse without medical approval and eight of those who involved in that act were fined, ”we have agreed that anyone that is caught in such an act will not only be fined but will also be jailed because it is a serious offence” he maintained.

The Provincial Secretary for the Northern Region, Mr Raymond K.M. Bindi maintained that before President Koroma threatened to seize the staffs of Paramount Chiefs, traditional authorities were doing little to ensure that the virus is contained, but after the President’s pronouncement, the chiefs have now joined the fight against the virus assiduously.

The Provincial Secretary reiterated that the disease is spreading so fast in the district because of the geographical location of the district, being that it is in the corridor of movements in the country, and added that the negative attitude and behaviour of the people towards the disease are contributing  immensely to the spread of the virus.

Mr. Bindi stressed that what is more important now since the traditional authorities have joined hands in the Ebla fight is to change the attitude and behaviour of the people, ”Positive attitude is what we should rely on to defeat the deadly Ebola virus”.

The Local Unit Commander (LUC) for the Makeni Division, Mr. Gibril M. Turay mentioned that Sierra Leoneans were not well informed about the disease when it started so they found it very difficult to accept it, but stressed that it can only be contained through positive attitude.

The LUC recommended that the Kambia District strategy to control the movement of bikes wherein a fine of two hundred thousand Leones (Le 200,000) should be levied on any okada rider that is caught operating after 7:00 pm.

The Secretariat also met with the District Medical Officer (DMO) Dr. Tom Turay and his team, wherein the Programme Manager for the ABC told the DMO that the Secretariat has decided to become the center stage in the fight against the scourge because it has been noticed that Sierra Leone can only succeed in eradicating the Ebola virus if the people become very positive towards the disease.

Responding to the Secretariat, Dr. Turay noted that one of the problems that is derailing the speedy containment of the disease is that people are still in the habit of exhuming corpses in the country, and furthered that it might be the reason why there are re-emergence of epicenters in the country. He also mentioned that the real epicenter of the virus is the mindsets of the people which bowels from their attitude and behaviour towards the disease.

The African Union (AU) Logistician of the African Union Support in Ebola Outbreak in West Africa Samuel Temesgen spoke of the AU’s response towards case management pillars like logistics, treatment and holding centers and food distribution to quarantined homes.

He noted that lack of coordination among the different pillars is the reason for the late supply of food to quarantined homes, and suggested that people in quarantined homes should have better knowledge on the importance of quarantined so that they will be able to manage themselves.

The Secretariat also witnessed the distribution of food to quarantined homes in the district and also visited one of the district’s Ebola Treatment Center at the Arab Hospital where the nurses and doctors expressed their determinations to render their professional services towards the fight against Ebola.