The tragedy of tragedies “Ebola” 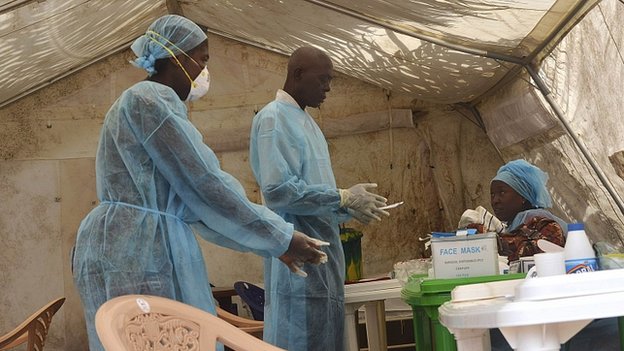 The tragedy of tragedies “Ebola”

The medical profession has become the most dreadful profession in Sierra Leone, and Sierra Leone has become once more a place to live with fear.  With the Ebola outbreak eight months ago, the vulnerability of medical personnel succumbing to the Ebola viral disease (EVD) keeps growing every day.  The death of Dr. Konoyima has brought the number of Sierra Leonean doctors victims of EVD to eight (may their souls rest in peace, as well as all other victims of the disease).

The interface between patients and medical personnel is very critical in the mode of transmission.  The ratio of patients to doctors in Sierra Leone is remarkably unbalanced.  Doctors are overwhelmingly crowded with patients from an outpatient setting to inpatient admissions.  Looking at the precautionary methods of avoiding body contact is quite impossible for doctors, who obviously have to touch or palpate their patients during diagnoses.  Except there is a better way of prevention by not touching patients the position of healthcare personnel becomes a serious tragedy.  If this trend continues of losing medical personnel without a remedy to the situation there will come a time no medical personnel would venture out there to do medical practice.  This will be a tragedy of tragedies.

This is my humble suggestion to the ministry of health to be more proactive in revamping the medical facilities.  The international community should be requested to help put on the ground tertiary hospitals that are capable of treating many other diseases instead of make shifts tents for the treatment of Ebola alone.  Perhaps this is the best time Sierra Leone would benefit in improving the medical system of the country.  The Government’s agenda of prosperity should encourage the diaspora with good incentives to return and serve the country.  The environmental sanitation should be markedly improved.  Water sanitation and supply to the population would encourage more hand washing which is a universal precaution.

It is also critical to investigate and close other Ebola laboratories that may exist in other parts of the country.  The need to take further measures against a possibility of EVD being airborne be considered.  We try to emulate the method of the British in admitting a few patients.  Therefore the need to build more health facilities around the country arise.  The mass media campaign must continue aggressively for the general public to maintain law and order in observing precautionary methods.  As the rest of the Ebola saga keeps unfolding with uncertainty, let all Sierra Leoneans unite in its fight to eradicate it.

As quarantined homes grumble over...