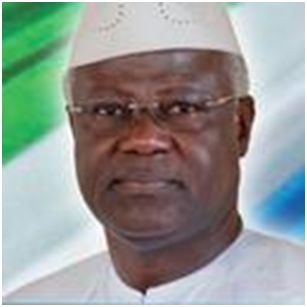 Port Loko, Oct. 25, 014 (MOHS) – Paramount Chiefs in the Port Loko district have taken a vow to stop the growing denial on the Ebola outbreak in their various chiefdoms in the district.

Assuring President Koroma over the growing high death rate in the district as a result of the denial syndrome, Paramount Chief Bai Kompa Bomboli of Koya Chiefdom on behalf of his colleagues reaffirmed their commitment at a mammoth meeting of Paramount Chiefs held at the Port Loko District Council hall that they would now enforce their By-Laws on the necessary precautionary measures against the Ebola disease within the 21 days deadline progess sets by the President.

Paramount Chief Bomboli while responding to President Koroma’s challenge for the withdrawal of staff of default Paramount Chiefs, said on oath they are ready to forfeit their staff if they are found wanting, and pledged to also take stringent measures against any Imam or Pastor that are not inconformity of the wishes of the President on the prevention and control of the disease. Especially in the area of washing dead bodies which accounts for most of the deaths in the district.

Making his statement, President Koroma in an aggrieved mood, expressed dissatisfaction over the high death rate in the district and the growing denial, with change still being a problem in the district.

President Koroma underscored the importance of Paramount Chiefs in the fight to contain the spread of the disease, expressing his disappointment over the infection rate of 480 people in two month time in the district.

He told the meeting that a new command and control structure have been put in place and gave a 21 day ultimatum for the reduction of infected cases and deaths in the district.

“Stringent action will be taken against any Paramount Chief and Chiefdom found wanting within the 21 days period”, President Koroma strongly said.

The President noted that most of the cases emanate from washing dead bodies, and educate the meeting about the safe blanket burial that would now be carried by the burial team immediately after the swab, followed later by the result. Appropriate action will be taken where the result is negative or positive, the President said.

“Tradition and customs should be put on hold, enforce your By-Laws and implement them by the powers vested on you”, President Koroma urged the Paramount Chiefs.

Imams, Pastors and relatives and family members, the President said would be given the opportunity to witness official prayers at a distance during burial in cemeteries to avoid infection risk.

In his clarion call, the President urges all Sierra Leoneans to concertedly join the Ebola battle noting that with all the international and local support, if situation continues with the denial syndrome it would be difficult to contain the outbreak.

UN press briefing in Geneva -- WHO...