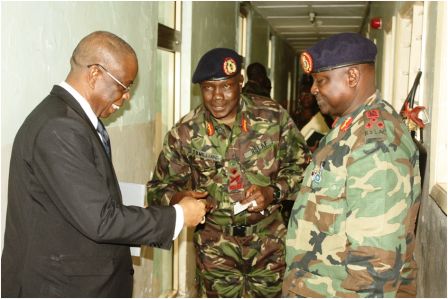 The Ghanaian High Commissioner to Sierra Leone, Major General (Rtd) Modey, on Tuesday 14 October 2014 paid a courtesy call on the Chief of Defence Staff (CDS) of the RSLAF in his office at the Ministry of Defence.

Welcoming the High Commissioner, the CDS expressed appreciation for the Ghana Armed Forces’ contribution to the professional development of the RSLAF. He emphasized the timeliness of the High Commissioner’s visit as the RSLAF is currently faced with the challenge of getting a large chunk of officers in the rank of Major to go through Staff College training. He said such training is not available in-country and therefore can only be acquired abroad; but which he said we cannot afford now due to the number involved. He opined that the only option is to conduct such training locally and request sister countries like Ghana to assist us with instructors on secondment. He therefore pleaded with the High Commissioner to see how best he could facilitate such a request.

In his response, the High Commissioner emphasized that as a retired senior military officer, he has keen interest in working with the RSLAF senior cadre to bring more improvement in the area of training. He therefore promised to look into the CDS’ request for Ghanaian officers to be sent on secondment. He however cautioned that current quotas provided for the RSLAF in Ghana, Nigeria and Bangladesh should be maintained specifically for high flying officers.

He further advised that continuous training must not be seen as a punishment and that the RSLAF authorities should pay special attention to the training institutions. He stressed the need to motivate instructors in training institutions by considering them for promotions and appropriate appointments at the end of their tour of duty. He also suggested the establishment of a Special Forces Unit which he said, is now the norm in militaries all over the world. He went further to state that the Special Forces are the first to be called upon in times of disaster and therefore should have special training to be able to respond appropriately. He said the Special Forces normally comprise personnel from the Army, Navy and Air Force and are either put together as one unit or maintained in their various parent units.

On the issue of designing training modules, the High Commissioner stated that the Ghana Armed Forces usually buy some modules through the internet, while some are brought home by officers returning from overseas courses. He further stated that the Ghana Armed Forces had also developed a small cell where imported modules are domesticated. He concluded the discussion by expressing his willingness to have a meeting with the RSLAF senior management where there will be ample time to discuss and come up with a better plan on how to improve training in RSLAF.

The High Commissioner, a retired Major General, is endowed with vast knowledge in military training and operations which he acquired during his several years serving as Deputy Commandant of the Ghana Armed Forces Command and Staff College and numerous tour on peacekeeping operations. His last tour was with the United Nations Mission in Liberia (UNMIL) in 2009, where he served as the Force Commander. A good number of officers in the RSLAF senior cadre passed through him at the Staff College.

In the fight against EBOLA Muslim...