Thank you Great Britain and the world 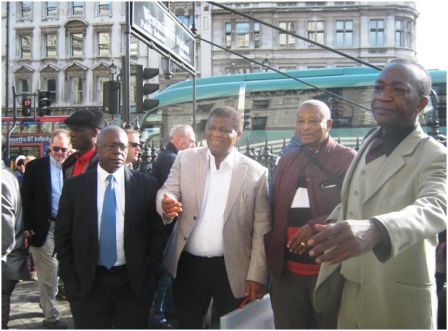 Thank you Great Britain and the world

Says the inscriptions on some of the placards

On the 11th October 2014 under the leadership of Mr Augustine Tutu, Sierra Leoneans gathered outside West Minister Station with placards some of them with the inscriptions written “THANK You Great Britain”, “We believe Great Britain can do more to help eradicate Ebola in Sierra Leone”.

The idea came about due to the horror caused by the deadly Ebola virus in Sierra Leone, Guinea and Liberia and the threats its poses to West Africa and the world. Mr Tutu took his time and called on fellow Sierra Leoneans to show appreciations of what the world including the British Government and the people are doing to help eradicate this deadly virus. When I spoke to Mr Tutu he made it very clear that this rally is not about party politics and it is not about the Government of the day. It was mainly about acknowledging the financial support, human resources and logistical support the world and Britain are given to Sierra Leone and the surrounding countries to eradicate an invisible enemy.

A letter was prepared to handover to the British Prime Minister thanking him, his government, the British parliament and the British people for their support to fight the deadly invisible Ebola Virus. A reasonable number Sierra Living in London attended the march to Number 10 Downing Street holding placards with different messages of appreciations and request for more support to defeat Ebola. At the gate of number 10 Downing Street we were greeted by a Police Officer who acknowledged that this was an impromptu march to thank Great Britain and the rest of the world for their response to fight that deadly disease.

Whilst at the gate of 10 Downing Street we were informed by a Police Officer that it was unlikely for a government representative to receive our letter at the time because of the weekend and there was a lapse in protocol. We were advised to submit the letter through a process explained to us by the Police Officer and Mr Tutu has agreed to submit this letter through the due process.

The Sierra Leoneans at the gathering were in a very positive mood. However Lots of Sierra Leoneans expressed their views about inaction on the part of the present government. Just to highlight few comments made by fellow Sierra Leoneans: Others including myself stated that the Sierra Leone Government should have learnt a lesson from two events – event one, the war that lasted for 10 years started from the interior of part of the Country and it should have been contained on the spot before escalation. The failure to do so by the then Government led to the 10 years senseless civil war that cost the lives of Sierra Leoneans and crippled the economy. Event two, the fact that this deadly killer started in Guinea; the Government should have put rapid response measures in place as we are seeing in the West to combat an invisible enemy. My understanding is, it was only when it started affecting provincial towns that the Government realised the deadly Ebola is determined to take lives regardless of whether you are poor, rich, a professional or a senior civil servant. The powerful Western Countries have realised that Ebola does not require visa, knows no border, race or colour and therefore have pledged recourse to combat the virus.

It will be appropriated to continue showing gratitude and knock at the doors of our friends until Sierra Leone rendered Ebola free. Whilst there was a positive mood amongst fellow county men and women there was a feel of sorrow for the victims of Ebola both the living and the dead.

Consultations are taking place under the coordination of Mr Ousman Bangura, the above mentioned names and myself to organise a bigger solidarity and thank you march to take place within few weeks time.