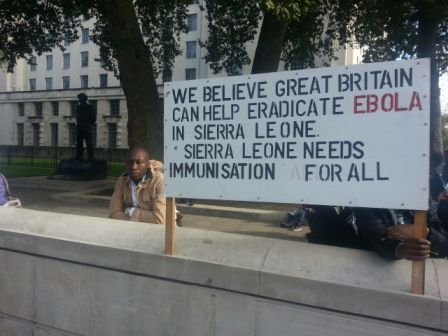 “Ebola must go, Ebola must go”; What do we need? More help; When do we need it? Now. Sierra Leoneans in London chanted as they take to the streets of London this morning in a massive rally in which they called on the British government for more help in eradicating the deadly Ebola virus in Sierra Leone.

From different locations and from their respective homes, the group – of young, old, men, women and children, marched peacefully through the streets of London after converging at Westminster Abbey before presenting a letter at 10 Downing Street the seat of power of the British government.

They urged the British government to accelerate work towards finding cure for the Ebola virus as well as training of local staffs and providing more logistics for victims of Ebola in Sierra Leone.

Britain has already committed £125 million in the fight against Ebola in Sierra Leone – this includes supporting 700 treatment beds to help up to 8,800 patients over 6 months as well as shoring up the country’s stretched public health services to help contain the disease.

Last Wednesday, the British government held a crisis group meeting, Cobra after which they announced that the UK would be sending 750 troops and a hospital ship to Sierra Leone to help combat the spread of Ebola there. It subsequently transpired that the deployments were already in progress, and that many of the troops were there or on their way there.

This latest development followed an international conference organised by the British Foreign Office at Lancaster House in London in which the government rallied decisive international support for Sierra Leone in its hour of need.

The conference, co-hosted by the Foreign Secretary and the International Development Secretary, brought together more than 20 governments, a dozen charities and NGOs, the UN, World Bank, health experts and the private sector to pledge funds, equipment and health workers.

Meanwhile, this latest rally will go a long way in boosting Sierra Leone’s relationship with Britain – if not for anything but the fact that it’s the first African country to demonstrate their appreciation to the British government for showing fatherly love to the it’s former colony.

What are our values and patriotism...