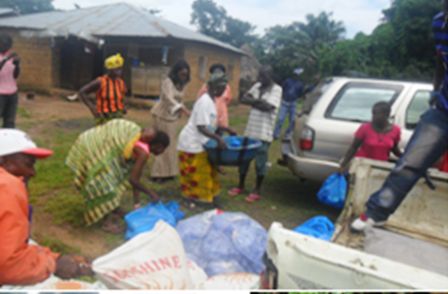 Mabethor, Oct 2 (SLENA) – Two female indigenes of Lunsar, Madam Kadeeja Bah Wakefield and Rugiatu Neneh Turay have come to the aid of the inhabitants of Mabethor, one on the most deprived and inaccessible villages in the Marampa Chiefdom, Port Loko District.

The two ladies led a team that braved its way to this abandoned village with bags of rice and cocking ingredients in addition to tins of chlorine, sanitizers, milk, sugar, tea leaf and a lot of other edibles.

According to sources, Mabethor is one of the villages that have been badly affected by the Ebola outbreak in the country. It is a village of about 10 houses and one that has recorded about ten Ebola cases.

Speaking to the Sierra Leone News Agency last week, Pa Santigie Koroma, the village headman, said the disaster started with the death of one Pa Umaru Kamara who died after a short illness. The virus has since consumed over six family members in a particular household. The village has now been quarantined.

Photos depicting activities of the two ladies on arrival at Mabethor

A woman who came to attend the death of a relative and eventually quarantined at Mabethor told SLENA that the situation is desperate.

This could be the same with the perception of the security personnel deployed in the village to enforce the quarantining of the village who stand the risk of being infected with the virus.

As said by a senior Police Officer on the ground, they do not even have a place to sleep and are left with the only alternative of sleeping in the quarantined homes themselves, saying only four of them were deployed in the village; one of them has gone on an illegal transfer, reports claim.

Both Kadeeja Bah Wakefield and Rugiatu Neneh viewed their contribution as part of what they referred to as ‘Pay back’ period. They said the community invested a lot in them both in their formative stage and right through their education which is why they now feel compelled to render a helping hand at such a trying period.

Both Ladies were baffled by what was being described as a lack of coordinated leadership and compassion for the sick, poor and needy people in the respective localities. They subscribed to the perception that the people of Mabethor have been rejected for far too long.

They encouraged the inhabitants to have faith in God Almighty and to remain hopeful that the issue of Ebola will soon be a thing of the past.