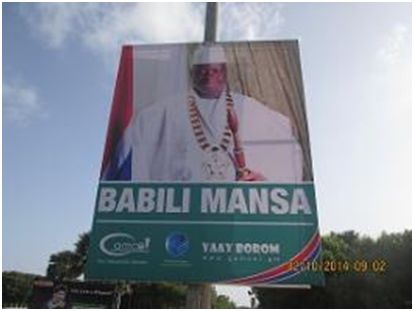 “Henceforth, I should be called – Babili Mansa” Says:- President Jammeh

In a surprise announcement over The Gambian National Broadcaster (GRTS) yesterday October 01st 2014, it was announced to the Nation that His Excellency Sheikh Professor Alhaji Dr. Yahya A.J.J . Jammeh Nasiru Deen Babili Mansa has hence, decided to discontinue using the name Nasiru Deen in His Excellency’s name. (Photo: President BABILI MANSA of The Gambia)

The announcement further states that as of date President Jammeh should be addressed as: Sheikh Professor Alhaji Dr. Yahya A.J.J.Jammeh Babili Mansa. A circular to the effect, from the Foreign Affairs Ministry was also sent to all Diplomatic and Consular Corps accredited to The Gambia.

A mounted poster in Banjul

No official or personal reason or reasons were given for the change of name neither did the Gambian Press, nor the Opposition Party asked questions or commented. Again the general public was silent over the issue only for side murmuring as to whether one has heard the announcement as they are busy preparing to observe the feast of TOBASKI.

President Yahya Jammeh Babili Mansa is unofficially referred to as in The Gambia as ‘PAPA DON’T TAKE NO MESS’ (whatever that means, this writer cannot say) and he had often made it clear to the Press that they are free to write anything about him but has again cautioned that whatever they write must be fact or they may have to prove it in a court of law.