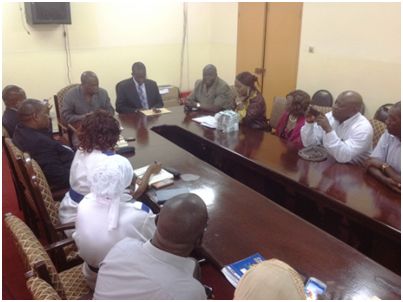 Presenting the donation on behalf of the organization to the Ministry of Health officials at the Youyi Building in Freetown, Hon. Rosaline Jariatu Smith of constituency 103 said following the call by President Koroma for all to fight against Ebola, the nurses association felt obliged to join the country in its fight against the deadly disease ravaging the country.

Hon Smith disclosed that the association has been helping the Ministry of Health in the area of scholarships and provision of medical equipment over the past years.

Vice President of the Sierra Leone Nurses Association in South California, Neneh Sesay praised the efforts of the Health ministry in addressing the issue of ebola , noting that while out there they still  have the country at heart and promised that they will do more to help the country promote health issues in the country.

Nurse Sesay pleaded with health officials for duty wavers as their association will be helping the health sector with equipment which they will have freight.

Abdul Koroma, President of the Association also lauded the work of the ministry, adding that that fight against the ebola virus is a national issue. ”We should help to fight against it”.

Receiving the money on behalf of the ministry, the Deputy Minister of Health and Sanitation, Dr.  Abubakarr Fofanah expressed thanks and appreciation for the donation from the Association and referred to the nurses as true patriotic.

Chief Nursing Officer, Matron Husainatu Kanu welcomed the donation and appealed for more scholarships from the organization for nurses in the country.

Togetherness is the key for Leone...