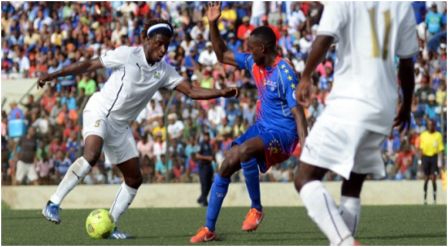 Istanbul BB striker and former striker for both Celtic and AIK, Mohamed Pobosky Bangura (in photo), is not included in the Sierra Leone line-up released by head coach Johnny McKinstry and his technical team ahead of the AFCON 2nd round qualifier in Freetown.

Sierra Express Media Sport UK understands the Istanbul BB striker was watching the Swaziland encounter in Freetown from the stands due to an injury.  What is not clear is whether Bangura 25, is still absent injured or is out because of technical reasons.

Another notable absentee is right back, Mustapha Sima Michael Dumbuya of Notts County FC.  Dumbuya 26, made his debut for Sierra Leone on 14 October 2013 in the second leg tie against Tunisia for the 2013 Afcon qualifier in Tunis.

Seychelles will face Sierra Leone in the 2nd round of the 2015 African Cup of nations (AFCON) qualifiers and according to reports, Sierra Leone head coach Johnny McKinstry has named his 20-man squad that will face the Indian Ocean island nation’s football team in Freetown National Stadium on July 19, 2014.