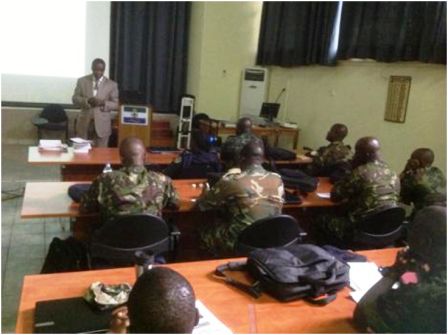 The Anti-Corruption Commission (ACC) on Monday 9th June 2014 empowered junior officers of the Republic of Sierra Leone Armed Forces (RSLAF) in the fight against corruption at the Horton Academy, IMATT.  The Horton Academy administers courses for security personnel in Sierra Leone, Liberia, Senegal and few other countries in the sub-region.  Presently, the Junior Staff Course which commenced on April 7 2014, for military personnel, police officers, prison officers and staff from the Office of National Security (ONS), is currently underway at the Academy and will end on July 25 2014.

According to him, endemic corruption in Sierra Leone cannot be divorced from pre-colonial encounter as well as the era of military rule in Sierra Leone and other political dispensations.  The economic and social causes are in most part a chunk of the network of the previous causes mentioned, he opined.

Corruption all over the world has negative effects, the Deputy Director affirmed.  Among them, he noted, that it has the propensity to undermine national development.  Whilst talking about the fight against corruption in a broader perspective, the Deputy Director also threw light on its causes in the area of defense.  In a further attempt to explain what constitutes corruption, Rashid Turay briefly took the participants through the twenty seven corrupt offences in the Anti-Corruption Act of 2008.  The fight against corruption is not the Commission’s standalone fight, he reaffirmed.

He also highlighted the role of defense personnel in the fight against corruption and state security.  He reminded them that the state comes first and everybody’s actions should be in consonant with state interest.  He encouraged students of the Academy to always be patriotic and that they should extend their patriotism to reporting corruption at the Anti-Corruption Commission.  He assured them that the fight against corruption is a winnable one.  In other to achieve that, he cheered them to a change of bad behaviours, negative opinions, attitudes and negative thoughts as well.

A Liberian military officer asked whether corruption can be eradicated in its entirety.  In his response, Rashid Turay said though it is a colossal task to completely get rid of corruption, he added that he is convinced the fight against corruption could be a winnable one.  Whilst concluding, the Deputy Director of Systems and Processes Review Department of the Anti-Corruption Commission encouraged the students to be steadfast and positive in the fight against corruption.

Journalists trained on Ebola in Ke...