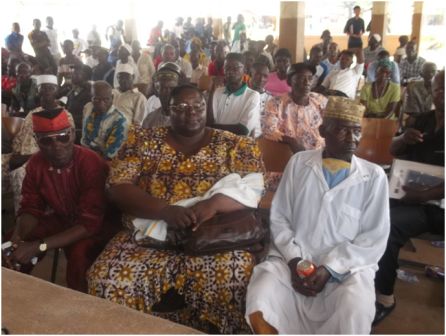 China Kingho Investment is to mine 110 million tons of iron ore in Pujehun District, engineer experts on Tuesday 14th and Wednesday 15th January, 2014 disclosed at Blama Massaquoi and Pujehun Town all in the Pujehun District respectively.

At the Environmental, Social and Health Impact Assessment Disclosure Meetings held on two consecutive days in Blama Massaquoi and Pujehun, a Consultant from Tropical Environment Design Associates (TEDA), Mr. Brima Koroma, said in his power point presentations that the company has budgeted a whooping sum of $10 Billion to undertake mining operations in Sierra Leone.

He informed the gathering that at least 1,200 permanent workers and 200 casual workers will be employed in the Pujehun District alone.

He disclosed that, Kingho Investment will be conducting an underground mining with advanced technologies for a period of thirty years. He also disclosed that during the company’s exploration they discovered iron ore with a grade of over 80% magnetic. The TEDA Consultant however informed the public that the mining operations will have both positive and negative impacts on the host communities. According to their independent survey, researches, studies and consultations, the consultant said, they have proposed recommendations to Kingho on risk management and other factors and how to mitigate and reduce the negative effects of their activities on the communities.

During the meeting at Blama Massaquoi, Mr. Patrick Kaikai, an indigene of Pujehun, told the gathering of all major stakeholders that Kingho is an ethical and responsible company that has the potential to develop their operational areas and possibly the Pujehun District at large as part of their corporate social responsibilities. He promised that he will not betray his people and that if he notices in the future that the company is not living up to the promises they are now making to his people he will be the first to call their attention to it and to remedy any breaches of their proposed commitments.  He stated that he will not allow Kingho to cause any harm to the health of his people, stressing that the people should benefit as long as the company continues operations and makes profits.

He said Kingho is one of those companies that came to Sierra Leone through the ideology of President Ernest Bai Koroma in making the country as a business friendly state.

Paramount Chiefs, Members of Parliament, residents, government officials, land owners, important personalities, women, youths, teachers, pupils, and other authorities attended the disclosure meetings and presented questions, contributions, recommendations and concerns to the Consultants of Kingho and their fears were properly explained to them to the satisfaction of the Consultants.

He said Kingho will prefer functional training of indigenes coming from operational Chiefdoms in the Pujehun District. He also appealed to the residents to encourage their children to take education very seriously in order to benefit immensely from the company’s activities.

Mr. Patrick Kaikai further disclosed that the essence of the meetings was for the people of the two Chiefdoms and others in the Pujehun District to know safety management and the risk or environment hazard the company’s operation will cause and try to evaluate or compare them.  He asked the people of Pujehun to make their inputs, concerns, contributions, clarifications, questions, and queries at the meetings and also read the Environmental, Health and Economic Impact Assessment document later to share views. Mr. Kaikai made a similar statement in Pujehun at the last meeting.

During the meeting at Blama Massaquio, Hon. Dickson Rogers of SLPP representing Constituency 89 in the Pujehun District where the Company will be operating said any development has the positive and negative aspects but one should try as best as possible to achieve the positive concept. He urged Kingho to help in the rehabilitation of the roads networks particularly when they too will be plying the same roads with their heavy vehicles and machinery to have access to their operational areas to their various operational areas. Making reference to the relocation of certain communities and destruction of cultural heritages, caves, sacred bushes, society bushes, Hon. Rogers asked Kingho to offer special prizes for the people to undertake some ceremonies to appeal to their ancestors and their covenants for the success of their operations.

He also stated that the communities in the operational areas are going to be prone to shortage of accommodations, health, educational and other social facilities and urged  the company to try as soon as possible to put modalities into place to improve on all the basic needs to march with the over population that will emerge as a result of the expected increase in the population of the area. He asked the company and the community to work on modalities that will prevent school drop-outs.

Hon Dickson Rogers further advised the company to take cognizance of the Local Content Policy initiative of the Government in order to employ the indigenes  of the communities they will be operating.

On behalf of the two mining communities, Kpaka and and Gariness Peri Chiefdoms, Paramount Chief Alhaji Kamara Koroma of Gariness Peri Chiefdom told his audience at Blama Massaquoi that land was one of the greatest assets to many rural Sierra Leoneans and therefore anything that relates to its leasing, rent and sale should be everybody’s concern. He said if they are expecting development now it was prudent to be wise about the future for next generation. He further went on to say that the document presented was well in place and had is acceptable taking into account all the comments people had made during the discussions.

During question and contributions Dr. Abu B Minah advised the company to empower the indigenes educationally and also equip the health facilities in the area for not only the residents but also for the company’s experts.

The Disclosure meeting on the whole was a success particularly when in Pujehun the Kingho was praised for being the first company to ever to hold a public EPA disclosure in the District Headquarter Town. They further stated that if other companies operating in the district can emulate the example of Kingho by being so transparent in their actions and operations they will not foresee any problems for them.

Hon. S B B Dumbuya is Sierra Leone... 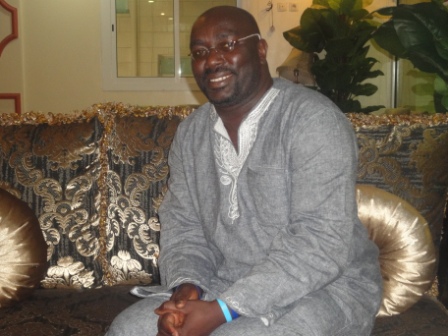