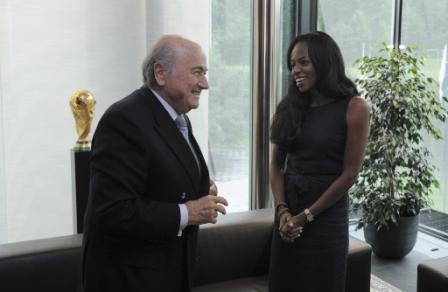 In a correspondence from FIFA to the only female Football President in the world, the Guest Management desk wrote, “As a member of the Committee for Women’s Football, we are delighted to invite you to the FIFA Ballon d’Or 2013 on 13 January 2014 at the Kongresshaus Zurich.”

Responding to the surprise invite as an end of year gift by FIFA, Isha Johansen who is now officially the only Female President of a FIFA member association said “I am extremely proud, honoured and very humbled, but there lies a huge sense of responsibility towards not just my country, but to the womenfolk globally.”

The FIFA classic showpiece brings under one roof all the movers and shakers in Football and for the first time in the history of Football in Sierra Leone the President of the FA will be awarded a platform for wider networking with players, coaches and experienced Football Administrators.

For this Isha Johansen said “Sierra Leone deserves to be on a global platform for the positive reasons and I truly do believe that Mama Salone’s time has come to not only announce ourselves, but to increase our ratings with quality representation internationally.”

The annual event which brings the football world to a standstill attracts a global audience of players, Coaches, journalists and fan of nominated players anticipate who would lift the coveted world’s best Footballer Award in both the Male and Female category.

This year’s main contenders in the male category are Bayern Munich’s French International winger Frank Ribery who won every trophy there was to win in 2013 in a remarkable year with Bayern Munich, Real Madrid’s Portugese speedster and goal getter Christiano Ronaldo who stood out for the Madrid based side despite their stuttering start to the season and Barcelona’s Argentine magician Lionel Messi who was sharp, consistent and fearless until injuries set in to blight the remaining months in 2013 for the diminutive slippery customer .

The FIFA Ballon d’Or is an association football award given to the player who is considered to have performed the best in the previous year. It is awarded based on votes by coaches and captains of international teams, as well as journalists from around the world.

The award started in 2010 after France Football’s Ballon d’Or and the men’s FIFA World Player of the Year award merged. The only winner of the inaugural 2010 FIFA Ballon d’Or was Lionel Messi till date and has been till date.