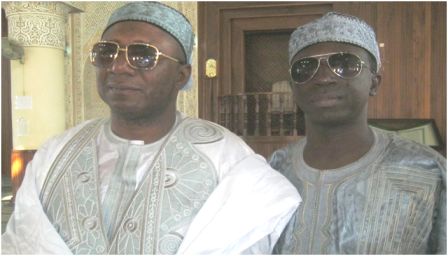 Traditionally, Sierra Leoneans traveling for vacation from the Diaspora to their native country are usually called JCs (Just-Come). Among the plentiful visits of JCs for 2013  end-of-year vacation in Sierra Leone are  Mr. Abu Bakarr Malik Sesay from Belgium and Mr. Abdul Sesay, aka Sole Pele from the USA. Specifically, the two have wholeheartedly fallen for what they described as the rapid infrastructural development realities the country has ever experienced.    (Photo: l-r  Abu Bakarr Malik Sesay from Belgium and Abdul Sole-Pele Sesay from the US)

The two have been regular end-of-year visitors to their native country – Sierra Leone for over half a decade. According to the two, they have no hiding space to keep their overwhelming joy and appreciation for particularly; President Dr. Ernest Bai Koroma whom they added, has done tremendously well in rebranding and developing the  country at this point in time.

Mr. Abdul Sesay aka Sole Pele from the US told this medium that he and very many colleague  Sierra Leoneans are  pleased  with President Dr. Ernest BaI Koroma for his tireless efforts in constructing a double-lane-drive along Spur Road in the west part of the capital of Freetown. The hillside bypass and Goderich roads he added; are very much encouraging, because they cut a hell of unavoidable congestion and obstacles to free flow of business and movement of city dwellers and urgent visitors.

Mr. Sole Pele is otherwise making a humble appeal for rapid completion of the roads. If these roads are completed in the shortest possible time,  the bulk of traffic congestion will automatically cut down, including pressure on city commuters.

From experience; Mr. Sole Pele continued, there is always snail pace development possibilities in any country that lack quality road network. As a patriotic citizen he noted, the current slow traffic movement within and around the capital of Freetown is not encouraging.  Vehicles park helter-skelter; street trading is the order of the day. The rights of pedestrians are grossly abused. Filth and garbage is dumped everywhere, loud musical beats obstructing everywhere. All of these are mechanisms hoped for, and for a better Sierra Leone, which he stressed must be completely dragged out of political sycophancy.

“I am not a Politician and have no interest in Politics – today and in future, rather than my steady  initiatives in mind to helping the ordinary Sierra Leonean  brother/sister in my own  little way”, he said.  To may Sierra Leoneans in the Diaspora including myself; it is the citizenry duty of every Sierra Leonean to forget Politics, region or tribe, and work in the general interest of the nation for the better and good of all. With positivity in the mindset, many brothers and sisters in the Diaspora will soon storm the country to render their little financial and academic gestures and help for a better and prosperous Mama Salone, Sole Pele assured.

Mr. Abu Bakar Malik Sesay  has been one of the All Peoples Congress Party (APC) Secretaries in  Belgium. He  said he is overwhelmed and ever grateful to the APC Party for seeing what he called, practicality on ground. One of his moved realities on ground is what he referred to as the 24 hr power supply of electricity to the northern city of Makeni. The facility he said; had long dropped in the late 80s, and nobody was ever dreaming of having a single day power- supply to that part country in such a crucial time.  Apart from the northern city enjoying the 24 hours power supply; some major parts of the capital of Freetown presently enjoy the facility.

Out of politics Abu Bakarr said; Praise and commendation needs to be given to the providers. For as long as development is gradually seen and felt, there is more hope for the better, until a meaningful need for another wise change arises, praise must be given to whom it is due, the two happy Sierra Leoneans tried to make the point.