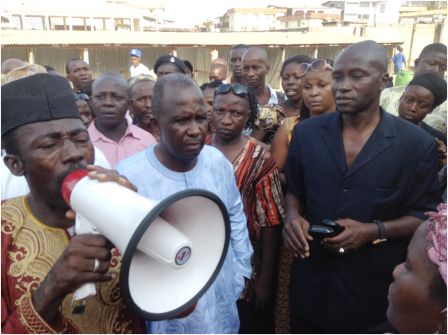 Friday, 3rd January, 2014 saw a massive demonstration by street traders from strategic areas in the Freetown Municipality including places like Sani Abacha and ECOWAS Streets.

According to some disgruntled traders the demonstration which processed from Sani Abacha Street to Youyi Building, came about in response to a notice issued by the Mayor of the Freetown City Council, His Worship Franklyn Bode Gibson, that all traders must not attempt to do any form of street trading by Sunday, 5th January, 2014 along Sani Abacha and ECOWAS Streets as any defaulter will face the full force of the law.

Addressing street traders to put all their grievances aside and find a better solution to the problem, were some prominent government officials including the Minister of Trade and Industry, Alhaji Usman Boie Kamara, the Minister of Fisheries and Marine Resources, Hon. Alieu Pat Sowe, the Minister of Transport and Aviation, Hon. Leonard Balogoun Koroma, and the special assistant to President Koroma.

Consoling the traders, the Minister of Trade and Industry, Alhaji Usman Boie Kamara appealed to them to calm down as government was looking at how best they can address their issue.

He stressed that they want to see traders benefiting from the resources of the country but that they must do so by respecting the laws of the land.

He described Police Officers who chase petty traders and cart away their belongings as thieves.

He stated that the Mayor wants to ensure that the city of Freetown is clean for the benefit of all sierra Leoneans and therefore needs their support to achieve this objective.

He assured them that they will soon hear from government about the final decision regarding the issue.

In response, the Chairlady of Abacha Street traders, Mrs. Jatu Conteh also known as Kay Kay pleaded with the Mayor and Trade Minister to allow them to move behind the footpaths instead of removing them now until a market is built for them.

In another development, the Minister and entourage paid a fact finding visit to Victoria Park to see how far the market building project there had progressed.

In his statement, the Minister of Fisheries and Marine Resources Alieu Patsow, urged traders to start occupying the market stalls that have been erected at Victoria Park for the place not to remain vacant.

‘Borbor for you mot’

The Spokesman for the traders, Mr. Abdul Akim Koroma, also known as ‘Borbor for you mot’ said before they processed their peaceful demonstration they firstly informed the Sierra Leone Police.

He maintained that they will never take the law into their hands because they are law abiding citizens who believe in dialogue.

Will Paul Kamara unite the footbal...