Final Communique for the Extraordinary Session of the ECOWAS 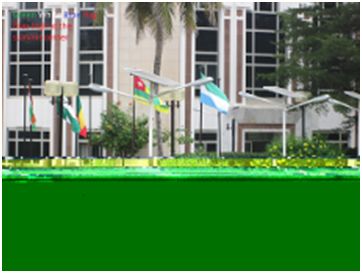 Final Communique for the Extraordinary Session of the ECOWAS

A FINAL COMMUNIQUE for the EXTRAORDINARY SESSION OF THE ECOWAS AUTHORITY OF HEADS OF STATE AND GOVERNMENT held in Dakar, Senegal on October 25th 2013 was put out after the meeting and has among others, its recommendations on issues of utmost importance to the region.

The meeting was to consider the ways and means of consolidating and deepening the economic integration process in West Africa.

The meeting was held under the current Chairman of the Authority H.E. Alassane Ouattara, President of Cote d’voire.

Sierra Leone’s Delegation to the summit was led by the Minister of Foreign Affairs and International Cooperation Samura Matthew Kamara and included the Minister of State Finance Foday Mansaray, Minister of Trade and Industry Alh Usman Boie Kamara, Ambassador Khadijatu Bassir,  Benga Samah from the ECOWAS  National Unit, a Representative from NRA, Yasim Jalloh Jamboria and Jonathan Lamin   from the Foreign Affairs Ministry.

Samura Matthew Kamara, Minister of Foreign Affairs and International Cooperation of the Republic of Sierra Leone.

The Summit took note of the memorandum presented by the President of the Commission, in particular on the ECOWAS Common External Tariff, Integration Levy, the Economic Partnership Agreement and the West African Monetary Integration Program. It also further took note of the report of the Chairman of the Council of Ministers on the Extraordinary Session of the Council which met on September 30th 2013 to examine the issues related to the consolidation of the Regional Market.

Commenting on the relevance of the various recommendations, the Heads of State and Government, reaffirmed their strong commitment to the development of the region by deepening economic integration.

Among some of the specific decisions made by the Heads of State and Government are :-

The importance of a Customs Union, as a decisive and irreversible phase in the process of consolidating the common market.

Encourages Member States to scrupulously adhere to the Trade Liberalization Scheme, notably through the strict application of the ECOWAS Rules of Origin and the continuation of the effort to eliminate all non -tariff barriers and reactivate the Community Industrial Policy.

To maintain, the existing Community Levy in ECOWAS and UEMOA for a transitional period of five years.

Calls for flexibility needed by the two parties in the search for compromise on all issues in the interest of the two regions.

Summit reaffirms their political will to establish a common currency for West Africa, as well as their commitment to the Monetary Cooperation Program and the roadmap adopted to that effect.

Summit reaffirms their commitment to the consolidation of the principles of democracy, good governance, peace and security as enshrined in the relevant texts of ECOWAS.

Authority urges the Commission to expedite the implementation of the pertinent recommendations contained in the report of the Mission of the ECOWAS Committee of Chiefs of Defense Staff.

At the close of the one day meeting, the Heads of State and Government expressed their sincere gratitude to Host President Macky Sall, his government and the people of Senegal for the generous and authentically – African hospitality accorded them and their delegations.

Same was extended to President Allasane Ouattara for the efficient manner, in which he presided over the deliberations.