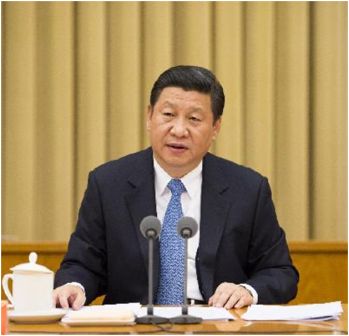 At a conference last week, President Xi Jinping delivered an important speech on China’s diplomacy with neighboring countries in which he put forward a number of new ideas of far-reaching significance.  (Photo: Xi Jinping, general secretary of the Communist Party of China (CPC) Central Committee, Chinese president and chairman of Central Military Commission, speaks during a conference on the diplomatic work on neighboring countries in Beijing, capital of China, Oct 25, 2013. [Photo / Xinhua])

China has witnessed dazzling development, but it also faces an obviously complicated and volatile surrounding environment. Some of the changes in relations between China and its neighbors have been favorable. Its economic and trade links with neighboring countries have seen remarkable progress, political and security ties with many neighbors have been strengthened, its relations with ASEAN countries are being consolidated, especially relations with Cambodia, Laos and Thailand. And after officially ending all outstanding territorial disputes, strategic mutual trust with Russia has been upgraded significantly, leading to more stable bilateral relations, as well as providing more leeway for China in its diplomacy with Central Asian countries. The greater mutual trust that has been established has ensured greater stability in China’s relations with Russia and Central Asian countries.

But there have also been some negative developments. Relations between China and Japan have soured and have entered the most difficult period since the normalization of diplomatic relations, and with mutual trust hitting an all-time low, there is a growing risk of clashes over the disputed islands in the East China Sea. China and five ASEAN countries also have long-standing disputes over maritime rights and interests in the South China Sea, and there has been a flare-up of disputes between China and some individual ASEAN countries in recent years. Also border issues between China and India remain unresolved and there were border confrontations in the first half of this year. And thanks to its long-term involvement in the United States’ global anti-terrorism campaign, Pakistan’s domestic stability faces serious challenges. Added to these will be the uncertainty created by the withdrawal of US troops from Afghanistan next year, and the Democratic People’s Republic of Korea’s persistence in developing its nuclear program, which is causing instability on the Korean Peninsula.

The disputes over rights and interests left over from history have intensified competition for resources. Also complicating the regional situation are the overflow effect on China due to regional disorderly competition, and the suspicion caused by China’s fast rise that is reshaping the regional power balance. Adding to the uncertainties is high-profile involvement of the US, which is forcefully carrying out its rebalancing strategy to the Asia-Pacific region and inciting confrontation inside the region.

Faced with the complicated surrounding environment, Chinese decision-makers have focused on resolving the disputes and forging win-win cooperation, and as a rising power actively designing and providing programs that benefit the peoples in neighboring countries and the region.

China is also incorporating some new ideas into its diplomacy with neighboring countries, which is reflected in the close interaction between China’s new leadership and their counterparts in neighboring countries this year, and the change from reactive to proactive diplomacy that looks to safeguard rights and stability simultaneously.

The design of this new diplomacy is based on China’s development objectives. Xi stressed during his speech that dealing with neighboring countries “should have a three-dimensional, multi-element perspective, beyond time and space”, and he proposed working with China’s neighbors to establish a Silk Road Economic Belt and a maritime Silk Road for the 21st century. This is undoubtedly a grand, forward-looking strategy of great geopolitical significance, and with its diplomatic strategy established, resources will naturally be allocated to back it up.

China has committed itself to the policy of fostering a harmonious, secure and prosperous neighboring environment. As members of the same global village with a common destiny, Xi’s proposal that countries in the region should foster a sense of community is a vision that can help promote a shared identity and the integration of interests between China and its neighbors. Needless to say, China’s development has and will continue to bring more opportunities to its neighbors. However, its growing influence has also made some countries nervous about its intentions.

In this regard, Beijing should consider the feelings of neighboring countries, outline China’s development goals in a clear way, and turn China’s development into an important driving force that improves the lives of people in the region as a whole. To win its neighbors’ support, China’s diplomacy must be principled and moral diplomacy. China must stick to the values of justice and joint benefits and make righteousness itself an interest.

The author is associate dean of the Institute of International Studies at Fudan University in Shanghai.

Final Communique for the Extraordi...