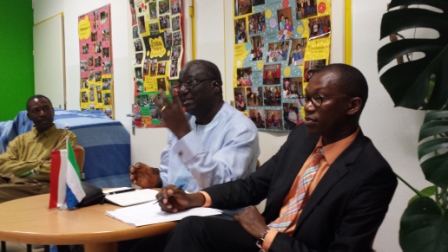 As part of his responsibility to adequately inform and protect the interest of Sierra Leoneans living in countries under his jurisdiction, Sierra Leone’s Ambassador to Germany accredited to Austria and Italy, has updated his compatriots in Austria about developments back home, informing them that his government is committed to transforming Sierra Leone´s socio economic development potentials.  (Photo: Ambassador Stevens and Information Attaché, Umaru S. Jah)

He was addressing a cross section of Sierra Leoneans in Vienna, during an official visit to participate in the just concluded 57th regular session of the IAEA General Conference.

Though it was a week-long conference with series of deliberations regarding the safety use of nuclear energy, the Ambassador took time off to meet his fellow citizens in the Austrian Capital and discussed issues relating to governance and problems faced by Sierra Leoneans in Vienna.

He Highlighted the success made by the Ernest Koroma led APC government in various sectors including infrastructure, health, education and the basic social services for the economic well being of its citizens.

The ambassador said the achievements made in those sectors demonstrate government’s commitment to cater for the needs of its people and ensure that Sierra Leone becomes a middle income country by 2015 through the Agenda for Prosperity.

Ambassador Stevens said Sierra Leone has recorded one of the fastest rates of economic growth in the world over the last decade. He attributed the tremendous progress to the outstanding leadership of Ernest Bai Koroma whom he described as a leader with a vision to move the country off the ground.

While acknowledging the good work of Sierra Leoneans in the diaspora through their contribution to national development for economic growth, the Ambassador informed them that the remittances made by Africans living abroad to relatives back home are more than donor funds received for the developmental purposes in Africa. He therefore encouraged them to continue with such support for the benefit of not only their relatives but also for the national good.

Protecting the interest of Sierra Leoneans he said, is one of the prime responsibilities bestowed on him by President Koroma. This was why he assured his audience that he will do all he can to keep them abreast with issues back home, and address problems faced by respective Sierra Leoneans in Vienna.

He further implored them to register with the Embassy to enable him have a proper statistics as to how many Sierra Leoneans residing in Austria.

The Secretary General of the Sierra Leone Union in Vienna, Mathew Kpukumu, welcomed the Ambassador’s visit, noting further that such a visit will help them clarify issues bothering their day to day activities in Vienna.

Questions were raised regarding investment programmes in the country, as the Union is ready to make financial contributions to promote development in the country. Mr. Kpukumu disclosed that the union has donated EUR 2,000 to Don Bosco, a children’s organization in Sierra Leone, as part of their contribution to national development. He called on the Ambassador to help them identify potential partners for further investments in the country.

Dr. Paul T. Yillia, a Sierra Leonean academic at the International institute for Applied Systems Analysis in Austria, also expressed appreciation regarding the visit of Ambassador Stevens, on behalf of the Austrian-Sierra Leone platform.

He said the platform is a non-profit organization aimed at establishing a network to promote Sierra Leone in Austria, noting that, they have made plans to visit Ambassasdor Stevens in Germany, prior to his arrival in Vienna. But his arrival in Vienna has saved them the hustle to travel all the way to Berlin for an official meeting with the Ambassador. Members of the Platform include Sierra Leoneans and Austrians who have worked and lived in Sierra Leone for a period of time. Their aim is to bring people together for mutual interest.