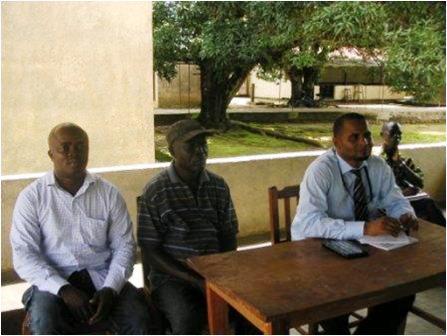 The Southern Regional Office of the Anti-Corruption Commission (ACC) has on Wednesday 31th July, 2013 held a fruitful meeting with health sector and community stakeholders at the community health centre hall in Gerihun, Southern Region Bo District. The meeting was organized to engage service providers and stakeholders on the services that are provided within their community and also to report on the work of the commission. The meeting attracted over seventy (70)   participants including medical staff, chiefs and other tribal authorities, police, biker riders association, youth groups and Free Health Care beneficiaries.

Giving the opening statement on how the clinic operates, the officer in charge of the clinic Mr. Michael Kamara informed the audience that the centre was originally supported by the catholic mission but later taken over by MSF and then the government of Sierra Leone. Mr. Kamara said over the years the clinic has grown in status and is operating on departmental basis. He said the clinic is fully operational with the following services: under five / free health care unit, the female department, the cost recovery area treating patients over five years, the referral unit partially supported by MSF amongst other. Mr. Kamara said traditional birth attendants attached to his center are not paid by government but the performance based financing initiative. Mr. Kamara mentioned some of the constraints and expectations of the facility pointing out the pronouncement that it will soon be made a bemok centre.

The Public Education Officer – South, Mr. Wilfred J Bangura in his statement gave an overview of the commissions’ involvement in health service delivery emphasizing on the free health care initiative. Mr. Bangura said, communities like Gerihun should benefit and also be informed about strides made in the free health care initiative. Mr. Bangura spoke of the communities’ right to access information about projects in their community and said if those facilities are not serving the community to their satisfaction, they should report to the commission. Mr. Bangura informed his audience about the status of on –going cases. Mr. Bangura encouraged his not to have fear in the commission but should have the zeal to report corruption. He said Gerihun people should maintain a zero tolerance to corruption.

The ACC Regional Manager – South, Mr. Samuel Marah, on behalf of the Commission expressed his appreciation for the high turn-out for the meeting especially with the short time notice. He acknowledged the importance of the health sector and community people involvement in issues of corruption and development.  Mr. Marah said the purpose of the commission’s visit is to sensitize institutions and communities on the work of the commission. Mr. Marah explained the three-pronged approach used by the Commission in the fight against corruption (public education, systems & processes review-prevention and enforcement or prosecution). Expounding on prevention drive of the Commission he said that the review of systems in the health sector by Commission has resulted in the improvement of management of hospitals and health centers. He cited the display of price lists and service charters as examples.

The manager also took time to explain corruption offences under the ACC Act of 2008 with emphasis on corrupt acquisition of wealth, misappropriation of public funds and property, abuse of office and abuse of position. He affirmed that the Commissioner and the Commission as a whole is resolute in the pursuit to conquer corruption in every nook and cranny of the country. He said whilst keen interest is being placed on preventing corruption, the commission will not- under any circumstance hesitate to investigate and prosecute offenders.

He encouraged all to join the fight against corruption by not engaging in corrupt practices, by spreading anti-corruption messages and by reporting corruption. He assured participants that whistleblowers will be protected at all cost. He encouraged the health workers to continue with the good work and to maintain integrity at all time.

Reacting to presentations, the audience spoke of challenges faced by the community. Speakers mentioned non functioning water gravity system supported by the Bo district Council, the poor toilet facility at the Gerihun PHU, lack of fefol and other essential drugs used by pregnant women, lack of ambulance services from Bo referral hospital amongst others. Community members also appealed for MSF to maintain the ambulance service. It was a general consensus amongst participant that more sensitization should be done in the interior  of the country in order foster public cooperation with the ACC.

The vote of thanks was given by Madam. Mattina  Bockarie

Plans are underway to re-organize...