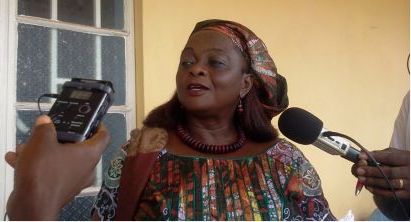 On Saturday 13th July, as part of their intervention in the area of addressing teenage pregnancy, sexually transmitted diseases, domestic and sexual violence on women in the country, the United Nations Population Fund (UNFPA) has handed over equipment and furniture supplies worth Le 116,750,000 to the Ministry of Social Welfare Gender and Children’s Affairs (MSWGCA) to strength the Makeni Safe Home at the home’s Makambo address in Makeni. (Photo: UNFPA deputy country representative Mariama Diarra delivering a speech)

The home as intended is to house and address women that are suffering sexual and domestic violence in that part of the country from their male counterparts by torture and/or bullying. The safe home will also serve as a temporary house in its pilot state that will be supporting women that have suffered particularly sexual violence, offering counselling and transforming them to be useful and responsible in society.

The deputy minister in the ministry of Social Welfare, Gender and Children’s Affairs, Mustapha Bai Attila, in his keynote statement described the home as a ‘dream’ of his ministry since they came into office, to take women off the streets and noting that if they have their way no women will live in the safe home, but because certain men in society have forced them to build safe homes for women, those men, he said, will have Pandemba Maximum prison as their home.

Mr. Mustapha Bai Attila stated the time for compromise of sexual and domestic violence on women is gone as all reported matters of such will be addressed adequately by his ministry.  He therefore sent positive signals to men that are fond of violating women to desist or dance to the tune of the ministry whilst at Pandemba Road prison.

The deputy minister thanked the UN family for constructing two safe homes for women in Bo and Makeni, which he assured his ministry’s total control and responsibility by ensuring the intended people benefit from the home, especially those that have suffered sexual and domestic violence, as the home will only serve as a temporal home and not permanent home.

UNFPA deputy country representative Mariama Diarra informed that the construction of the safe home was done by United Nations Development Program (UNDP) but went on that as part of the UN Family they always believe in working together; the UNFPA has taken the responsibility of equipping the home upon completion of the building some two years ago

Madam Mariama Diarra said they are not happy, especially when the home is not being occupied by its intended beneficiaries, thereby exposing them to more violence. She said the rate of reported cases of sexual and domestic violence on women is alarming in the country as children, according to her, in this day don’t fear sex, and she said parents must ensure they stand tall for the proper upbringing of their children, whom she described as future rulers.

UNFPA deputy country representative said women’s rights are being violated on a daily basis, against which back drop the UN Family is supporting government with equipment and furniture supplies and the building to help look after women that are going through such stages.  She thanked government through the ministry for allowing them to be part of that development and urged that the home starts its intended operational purposes.

The Mayor of Makeni City Council, Sunkarie Kabba Kamara, thanked the UN family for their consideration of the safe home to be erected in her municipality, which she said has demonstrated UNFPA’s efforts to address women and children’s issues in the country. She said women have suffered a lot as a result of violence from men, but with full operation of the safe home, most of the violation women in her municipality and the region might face will be addressed adequately, noting that most women stay in their houses even after they have been violated by men because before now there was no safe place for those women, and now that the UN has provided them with one, issues of violence on women will reduce in that part of the country.

The Permanent Secretary in the Ministry of Social Welfare Gender and Children’s Affairs, Joseph Kanu, thanked UNFPA and UNDP for their bold steps in taking up the venture to assist government in building the safe home and for also equipping it with modern facilities at Makambo.  He pledged the Ministry’s total appreciation to the UN Family, promising of proper care and well utilization of the home and facilities being handed over to them through the local council.

CORAF impressed with projects at N...