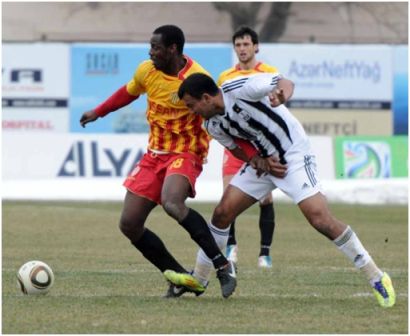 Sierra Leone international Samuel Barlay, former East End Lions and Malmo FF central midfielder, (in photo) has signed for Azal FC in Azerbaijan with over a year’s contract with a clause to extend for another year.

Talking to Sierra Express Media UK from Sweden, Barlay who will be 27 years old this September said, ‘In life it is always nice to welcome a new challenge, my journey was alright, everybody is looking forward to the new season, and we are in a good condition for work.”

‘For me working hard is the key for any player base for fitness, I’m happy to be here and ready to help my teammates to success’.

The central midfielder becomes manager Vagif Sadygov’s major signing of the summer, and the Azal President Zaur Akhundov, according to report is happy with Barlay joining his side ahead of the new season.

The versatile Sierra Leonean international, who signed for Malmo FF in Sweden  from East End Lions shortly after the FIFA U-17 World Championship 2003, has joined his new teammates for the pre-season.

Barley left Ravan Baku at the end of his two-year contract in the summer of 2013, with a clear intention of a fresh challenge.

Barlay, who is a regular for his country, would need to put up extra effort to keep his space in the national side considering the competition with the squad.