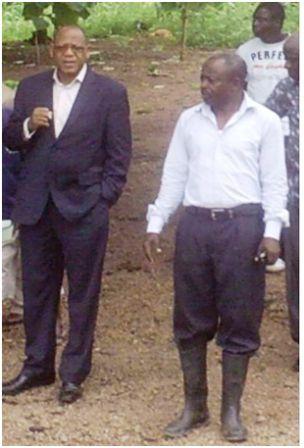 The West and Central African Council for Agriculture Research and Development (CORAF/WECARD) is a sub-regional organization that is constituted of the National Agricultural Research System of 22 countries of West and Central Africa. Within the framework of the implementation of its Operational Plan (2008 – 2013), the organization in 2008 developed a Manual of Procedures for the management of the Competitive and Commission Grant scheme used for the selection and implementation of diverse projects of the plan.  (Photo: Dr. Paco Sereme of CORAF and Dr. Olapade Olufemi Julius)

Five years after the Operational Plan, which will end this year, procedures were engaged for its evaluation. With the recent evolution of the organization, there is an urgent need to revisit and review the Manual. It was against this background that Dr. Paco Sereme who has served CORAF/WECARD for about nine years, to serve as an individual consultant to evaluate the Manual of Procedures for the management of the Competitive and Commission Grant Scheme.

The Director of Research’s visit to Sierra Leone is part of selected projects as case studies for the revision of the Manual. Over the weekend (Saturday 13th July 2013) Dr. Sereme held a meeting with stakeholders at the Njala University Campus, including staff of the Department of Aquaculture and Fisheries Management School of Forestry and Horticulture Njala University.

Dr. Sereme said CORAF in planning to strengthen the capacity of all its actors, and added that if they continue using the Competitive Grant skills it will not bring onboard some stakeholders in project implementation. “The idea is that we should give more opportunities to our stakeholders to implement Commission Project. We will use a criteria to have all our member countries implement projects,” he said, and informed the gathering that countries like Sierra Leone will be given the opportunity to implement 50% of Competitive Base and 50% Commission Base.

He said the new phase of the project will start in 2014. He commended Sierra Leone for giving a student face to the project, and reiterated that this will be used as one of the criteria for other countries in the future.

Project Coordinator, Department of Aquaculture and Fisheries at Njala University said the entire project is aimed at reducing poverty through empowerment of the people. Dr. Olapade Olufemi Julius informed the meeting that the project is faced with challenges such as limited resources, which has dragged their activities a little bit behind the required timeline. “Even though funds were provided late, we are progressing with the little resources made available.” Dr. Julius informed the visiting envoy that the little resources provided are used to empower farmers. He added that some materials are to be purchased out of the country, thereby mating transportation costing a lot. The Project Coordinator said the project vehicle is yet to be provided and laboratory equipment to train farmers are also not made available.

In 2008, fish production in the West and Central Africa Sub-Region was estimated at 2,815,649 tons, and aquaculture contributes to less than 6% of this. Fisheries and Aquaculture is a source of income for about 10 million people and there are lots of business opportunities in fish farming.